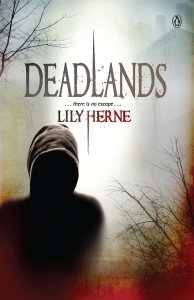 Buy a copy of Deadlands

It’s been a decade since the zombie apocalypse destroyed Cape Town in the middle of the World Cup. The survivors have established a new but distressingly familiar kind of order in heavily walled enclaves while outside, in the Deadlands, the zombie hordes still lurch. But no one is trying to wipe them out; instead, they’re worshipped.

It’s a brillint, unique twist on the zombie story – zombies are the new religion, revered for ‘cleansing’ Cape Town of its violence and corruption so there could be a better life for all (who survived). Believers are known as Resurrectionists, the zombies are respectfully known as the Reanimated (dissenters just call them Rotters), and the ‘priests’ are the mysterious cloaked Guardians whose faces no one has ever seen. There’s no question now about whether or not there’s an afterlife, because it’s right there in the Deadlands, moaning for your flesh.

Lele (Leletia) de la Fontein sees right through all of this crap. She’s a feisty, rebellious 17-year old, although at times you can be forgiven for calling her a brat. But on the other hand, she’s no doormat and most of the time I admire her spunk. She’s just lost her grandmother, not only to death but to the Guardians, who who take all dead bodies to the Deadlands where the zombies will attack and reanimate them. Now Lele and her brother have to stay with their emotionally distant father and their stepmother, who Lele can’t stand. She also has to go to a new school where, in classic YA tradition, she becomes the free-thinking outcast amidst petty, small-minded popular kids who make fun of her. Like any teenager, Lele thinks that her life couldn’t get any worse, but then she gets selected for the ‘Lottery’ – every year the Guardians choose a few teenagers from the enclaves and take them away, for reasons unknown. And that’s when Lele’s real adventure begins.

Now because Deadlands is the first zombie novel set in Cape Town, my home town, I really wanted to like it. Lily Herne is a psuedonym for SA author Sarah Lotz and her daughter, and as a South African I’m proud to see that SA writers are starting to get published in my favourite genres. At the same time however, my review ethic is to be honest even when I’d rather not be, but more importantly to not be condescending by setting lower standards for certain books as if the authors are mental inferiors who can’t really be compared to their peers. South Africa’s education system is doing that to the country’s youth. I hate it, and I’ve never wanted to do anything similar here. Which in this case means I wanted to like Deadlands, and I think it could have been the novel I was hoping for, but at the end of the day it was disappointing.

There are some really cool things about it nevertheless. Deadlands has an awesome political snarl, particularly in the beginning. Today’s ANC government is there in two different forms. On the one hand it’s followed its current path of corruption and transformed into the embassy – the pro-zombie, authoritarian government of the enclaves, with a firm hand on the necks of its citizens, and institutions like Malema High feeding propaganda to impressionable young minds. Like the ANC it’s also full of struggle heroes, but this time they’re from the zombie war.

Then there’s the ANZ – the anti-zombians – a rebel faction that’s more like the ANC of the struggle years, although they’re criticised for their violent methods which sometimes get innocent people killed. The embassy is of course trying to shut them down, much like the real ANC’s increasing hostility towards dissent and opposition, as they turn away from their own revolutionary ideals towards the racism and small-mindedness that characterised the oppressors they once fought.

Admittedly, I’m not as well versed in politics as I should be, but I can’t deny that it gives sci fi and fantasy the edge that makes for truly fantastic, memorable reads. Unfortunately Deadlands isn’t all that interested in its own political and religious satire. Once Lele gets chosen for the Lottery and leaves the enclave, Deadlands becomes a more conventional action-adventure novel. She meets a group of rebels known as the Mall Rats who turn her into a teen action hero, and the mystery, religious satire and political intrigue gets left behind. The action-adventure bit is the main part of the novel, but for me it was the most boring and it drags on for quite some time.

What I really wanted was to know more about that zombie cult and the Guardians. Who are they? What are they? And what are they up to? These are some of the most interesting and exciting questions in the story, but the answers are predictable, disappointing or just not good enough. It’s not hard to guess why the Guardians are taking teenagers, but you have to wait until the last few pages of the novel for this to be revealed. Having waited so long you expect the secret to be epic; instead my final thoughts for the novel were “that’s it?”. It would have been so much better if Lele had discovered at least part of the truth about the Guardians early on and then gone up against them in the remainder of the story. This could still have allowed for a sequel-ready ending, which is what we get anyway, with a lame line: “this is the end of my story, but somehow I’ve kind of got the feeling that it could actually just be the beginning” (293).

Speaking of lame lines, there are A LOT of them. Almost all of the chapters end with cliched attempts at intrigue:
“But, as I was about to find out, that was way easier said than done.” (15)
“I couldn’t have been more wrong.” (28)
“But by then it was too late.” (106)

To make things worse, there are many, many chapters, most of them bluntly ended with lines like these. Deadlands is only 293 pages long, but it has a whopping 69 chapters. On average they’re just 2 or 3 pages of well-spaced text long. It makes the story feel choppy, and as far as writing goes it seems lazy.

I also feel like the Guardians, the politics and the religion receded from the plot because the author(s) got bored this complex material and wanted to get to the bit about the cute, sexy rebel chick kicking zombie ass, raiding the mall, and trying to decide which of the two hots guys falling for her she can trust. Of course Deadlands is a YA novel so that’s exactly what the target audience wants, but there doesn’t have to be an ‘either or’ toss-up between story and substance. A better novel would have integrated the mystery and social satire with the action and romance.

It would also have sewn up some of the plot holes. Like the mall raids. These are pretty common teenage fantasies – having unlimited access to an empty mall so you can take all the cool stuff you want. For reasons only revealed at the end (very very thin reasons) the Guardians have kept Century City mall up and running, even after destroying all other buildings in the city, and the Mall Rats go there to scavenge for books, toiletries and clothes. There’s a HUGE plot hole here. As far as I could tell, the Guardians don’t restock the shops in the mall (how could they?), but the Mall Rats go there perhaps once a week to fill orders from the enclaves. It’s a big mall, but there’s only so much underwear on the shelf at Woolworths; there’s no way they could still walk in there with a shopping list and get everything on it. I got really, really annoyed when they did a book run at Exclusive Books. I worked at that branch for 3 years and I never, ever saw a copy of the Norton Anthology of Poetry or Rustum Kozain’s poetry collection This Carting Life. The Norton is too academic and expensive for a commercial store, and poetry collections are pretty scarce because they don’t sell. Nevertheless, Lele finds both easily, and it’s the first time since she was 7 that she’s even been in a bookshop.

There are other gaps. Unless I missed it, there’s no mention of what happened to the rest of South Africa or the rest of the world. I can only assume that the zombie epidemic was global, given that there is no mention of help from anyone outside of Cape Town. As I said before, it’s not hard to guess what the Guardians do with the teenagers, but apparently no one in the enclaves has tried. I don’t even want to get into the implausibility of the Guardians keeping a mall as large as Canal Walk open, lights, escalators, cameras all running.

But, as I keep having to remind myself, this is YA and many fans of the genre probably won’t mind the glitches, the way the social critiques give way to action, or the short chapters and sloppy writing. I couldn’t shrug off the fact that I do mind these things, but I also have to admit that there were parts of the novel that I admired. So if Lily Herne produces the sequel implied in the closing lines I won’t hesitate to buy a copy, but I hope it’s a better read than this one.

11 thoughts on “Deadlands by Lily Herne”