Jeyn (pronounced “jen”) Roberts grew up in Saskatoon, Canada. She started writing at an early age, but when she was twenty-one she moved to Vancouver with dreams of being a rock star. For the next several years she played in an alternative/punk band called Missing Mile. A former singer, songwriter, actress, bicycle courier, tree planter—Jeyn graduated from the University of British Columbia with a degree in Writing and Psychology. Shortly afterwards, she moved to England, where she received her MA in Creative Writing at Bath Spa University. An avid traveller, she’s been around the world, including teaching in a high school in South Korea and writing novels in her flat in Vancouver. She’s taken some time out to chat with me about her latest addition to the YA dystopian genre, Dark Inside.

Welcome Jeyn, and thanks for joining me on Violin in a Void.
You’re a new writer on the YA scene, but there already seems to be a lot of excitement about Dark Inside. Can you tell us a bit about yourself and the novel?

Sure. What can I say about myself? I love to travel and explore. I’ve been lucky enough to live in three different countries in the past decade. I’m hoping that number grows because I love learning about new cultures. I hate to sit still. I love being outdoors. And I like to do animal rescue work when I have free time.

Dark Inside is my first novel. One day everything is normal. Then the earthquakes begin and a terrible evil is unleashed. Overnight, the darkness inside is released and people are turned into crazy killers. No one is safe. Mason, Aries, Clementine and Michael are four teenagers who are just trying to stay alive. This is their story. 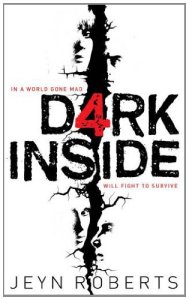 Macmillan is marketing Dark Inside as dystopian fiction, although I would call it apocalyptic, as it’s not about a dystopian society but rather about the destruction of society altogether. What drew you to this genre, this kind of story?

I think it’s very terrifying. For me, isolation is quite possibly the scariest thing around. It’s even scarier when there’s nowhere to run and hide.  What happens when the people who are supposed to keep you safe are gone? It’s also the sociological aspect. How will people behave when there are no more rules? I find it all fascinating.

The catastrophic earthquakes and psychological changes of Dark Inside leave behind survivors of all ages. However, the story is told from the perspectives of teenagers and almost all the major characters are adolescents as well. What made you choose their perspectives, their experiences over other possibilities?

I really just like writing for teens. There are so many great YA books on the market right now. Who wouldn’t want to be a part of it? One of my teachers once summed it up perfectly. She said there will always be someone inside of us, pushing towards the surface, with a story that needs to be told. I guess all my inner voices are teenagers.

Can you tell us a bit about your writing style and the structure of the novel? For example, the narrative is composed of five voices – Mason, Aries, Clementine, Michael, and a mystery voice whose chapters are labelled ‘Nothing’.

I don’t particularly think I have a certain writing style. I tend to write in all styles. Currently I’m working on a first person/present novel.  But when I was in the early stages of Dark Inside, this is what felt right. ‘Nothing’ was the first character I created. But then Mason and Aries came along. Clementine and Michael followed. I liked being able to have them in all parts of North America because I felt their journey would be the most important part.

With its mass destruction coupled with tragic but hopeful human stories, I think Dark Inside would be an incredible experience on the big screen, especially for YA fans. Would you be interested in a film adaptation?

I sure would! Currently I have a film agent (the same agent who sold The Hunger Games).  So hopefully there will be a movie in the future.

The novel leaves a lot of unanswered questions about the how, why and what next of this apocalyptic scenario, and the ending feels like another beginning. Does this mean that there’s a sequel in the works? If so, is there anything you can tell us about it?
There is indeed a sequel in the works.  It will be out next spring. I’m currently working on the final edits. Personally I think it’s even better than the first book. You’ll get to learn a lot more about each character, and quite possibly learn the identity of Nothing. There are some great new characters including a university student named Raj and a failed leader called Ryder. But that’s all I’m giving away. Don’t want to spoil it!

Will the next novel pick up where Dark Inside ends? Should readers get ready to witness the rise of a new, dystopian society created by the humans who’ve been transformed by the darkness within them?

The next book picks up three months after Dark Inside ends. It’s close to Christmas but no one is feeling very festive. Everyone is trying to adjust to this brand new world. The Baggers are starting to rebuild society and forcing survivors to work for them. They are rounding up people into camps and killing everyone who refuses to obey. Relationships are being formed and broken. There’s even a bit of romance.

Thanks so much for the interview Jeyn!

Jeyn’s been on a blog tour since 22 September, and if you want to know more, take a look at the tour schedule, where you’ll find all the relevant dates and the urls of some great YA blogs.

Dark Inside is out now. US readers will have to wait until 1 November before they can buy it in print, but the Kindle edition is already selling on Amazon. If you’re interested, you can read my review of the novel here.

And now for the bit you’ve all been waiting so patiently for – the giveaway! Macmillan Children’s Books is giving away two copies of Dark Inside to Violin in a Void readers.

Terms and Conditions
This competition is open internationally.
Entries close on Sunday 9 October at 12pm GMT+2. The winners will be announced on Monday, after being selected using random.org.
Following by any means other than the three listed above doesn’t count, and I check all entries.
The prizes are sponsored by Macmillan Children’s Books, and as a result I will be passing the winners’ postal addresses on to my contact there so that they may send you your books. Distribution of the prizes is therefore the responsibility of the publisher.

14 thoughts on “Jeyn Roberts on her debut Dark Inside and a giveaway!”