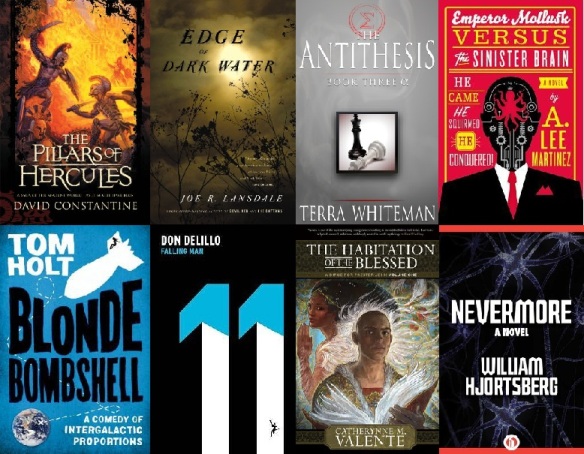 Overall, March was a decent reading month for me. I would have liked to read a bit more, but at least it was a big improvement on February. I’ve managed to shake my Skyrim addiction, at least for now, so I can give my books the attention they deserve.

The Pillars of Hercules by David Constantine is actually a leftover from February, but since I didn’t really include in that round-up, I’m putting it in now. I must warn you – it’s terrible. I hated reading it, but at least that means you can avoid the mistake of reading it too.

Luckily, that disaster was followed by the rather good Edge of Dark Water by Joe R. Lansdale – a thriller/adventure set in the old American South. I loved the Southern wit in the writing, and the sense of horror that permeated the story.

Next up was The Antithesis: Book 3α by Terra Whiteman, the fourth book in her series about the war between heaven and hell. I usually lose interest in series, even when I like them, but this one has managed to keep me hooked. Look out for an interview with the author and a giveaway some time soon!

I found some comic relief in Emperor Mollusk versus The Sinister Brain by A. Lee Martinez. It’s an utterly ludicrous mystery adventure featuring an super-intelligent octopus from Neptune who was once an interstellar warlord but has now settled down as Emperor of Earth. Now there’s a sinister disembodied brain trying to kill him… Good light fun for sci fi fans 🙂

My leisure read for the month was another sf comedy –  Blonde Bombshell by Tom Holt. In the early days of this blog I wrote a short post about how we’re always saying how we want to read something by this or that author, but we never get around to it. I wrote that after reading the first few chapters of Blonde Bombshell in a bookshop and finding it both hilarious and engrossing. At the time, Tom Holt was one of those authors I’d been meaning to read for ages, but I didn’t buy the book because it was too expensive. I later found a copy at a sale. I’ve read a few of his books since – they’re good reads, if not great. Blonde Bombshell was the same. Not as good as I expected, based on those first few chapters, and there were some huge plot holes, but it was still a nice break from reviewing.

Falling Man by Don DeLillo was a review book I received from Pan Macmillan last year. I’d enjoyed DeLillo’s White Noise at varsity, so I thought I might like more. Unfortunately, I didn’t like this one at all, although I appreciated some of the subtlety of the writing.

The Habitation of the Blessed by Catherynne M. Valente is the kind of book I always dream of reading. It was just unbelievably beautiful. I’d hoped to post the review last week already, but I haven’t finished it, thanks to a combination of laziness and finding it difficult to write reviews of the books I really love. It also meant I broke the Tuesday/Thursday review schedule I’d managed to stick to for the rest of the month 😦 There’s so much I want to talk about, so many passages I want to quote, that the review is way too long. I’ll post it once it’s refined and slimmed down. For now, just know that it’s an exquisite piece of mythical fiction.

Nevermore by William Hjortsberg is a 1994 publication that’s been re-published as an eBook this year. It’s a historical murder mystery based, in part, on an actual friendship between Harry Houdini and Sir Arthur Conan Doyle. Doyle is on a USA tour, lecturing on spiritualism and psychic abilities. During that time, a New York murderer is killing people in an imitation of Edgar Allen Poe’s stories. The victims are all linked to Houdini in some way, and Poe’s ghost starts appearing to Doyle. An interesting idea for a literary thriller, but sadly it’s not a very good book.This, and one or two other books, have made me think that maybe I should avoid books that are being re-published, because there may be a good reason they fell into obscurity. Review to follow soon.

April needs to be a really productive reading and reviewing month, as I’ll be going away for two weeks in May and won’t be blogging much then, if at all. I’ve just finished Germline by T.C. McCarthy, which I hope to review next week. On top of my tbr pile is Westlake Soul by Rio Youers, some weird fiction about a superhero in a coma, and Faustus Resurrectus by Thomas Morrissey, an urban occult thriller.

Now, time to get to work…