Terra Whiteman is a scientist by profession, a philosopher by hobby, and author of The Antithesis series. After graduating with a degree in biochemistry, Terra now works as a clinical toxicologist while continuing her writing endeavors on the side. Whiteman’s genres include science fiction and gritty dark fantasy, sewing together intricate plots and philosophical themes.

The Antithesis is my favourite indie series, and one of very few series that I follow compulsively. I seldom make it past book two, even if I like a series, but Terra’s characters and ideas have kept me hooked through four books and I’m eagerly awaiting the final novel, due to be published later this year. In the meantime, I asked her to tell me a bit about her life as a writer and her thoughts on The Antithesis.

Tell us a bit about your journey as a writer.

Not much to say, really. I’d never actually considered writing professionally until I was approached by 1889 Labs. I ran a web serial as a hobby and it ended up attracting a lot more attention that I’d anticipated. I think The Antithesis had over three thousand regular readers that showed up each week to read each chapter (at the time called ‘episodes’) before I signed a contract with 1889 Labs. The Antithesis itself was sort of an escape from my real life as a broke, overworked and sleep-deprived student. Before The Antithesis I’d only ever written short stories which I’ve never published or even let anyone read.

As an indie author, you’re responsible for so much more than just writing the book. What has your experience been with the publication of The Antithesis series?

Actually it’s not that much different than traditional publishing. I don’t self-publish (self-published and independent published authors seem to be blocked together nowadays; before that wasn’t really the case). I have two editors, one for content and grammar and the other for contininuity and flow. I write the books, send it to one, then the other, and then it gets published after hours of arguments and tantrums and negotiations over what I should and shouldn’t change.

I think the real difference is the fact that I do have more control. Though my book covers are designed for me, I get to tell them what I want. I also get a say in how I want to price books and promote books. 1889 Labs is an independent publishing company, and albeit small, they’re very efficient in giving the author as many resources as possible. They even gave me my own publicist.

The Antithesis takes a sci fi approach to the war between Heaven and Hell. Nothing is as you’d expect it to be, and there aren’t even any gods in the traditional sense. What inspired this story?The Antithesis was actually a scientific project in a literary sense. I’m a biochemistry major with a serious passion for philosophy. That being said, The Antithesis (which will be called TA from this moment on) isn’t actually about the war between Heaven and Hell. At its core, it’s about relationships and a complete rejection of duality. The entire point of this story is the fallacy of good and evil and there was no better way to set the stage than to use the two most renowned symbols for these polarizing ideals: angels and demons. TA explores a very messy shades of gray character cast, set within an idea of how Heaven and Hell might exist, could it actually be explained in a scientific sense.

How has your background as a biochemist influenced the series?

I’ve been obsessed with the biochemical sciences since early high school. It’s one of my passions, and it was only natural for me to incorporate it into the series. I feel the hard science in TA gives it a very realistic component to the otherwise fantastical premise of the story. Basing the Vel’Haru race off of the biological behavior of ants, for example, allows readers to quell the disbelief of certain elements revolving around them. Providing a world with a gaseous, oceanic core while its land masses are actually suspended above it in layered islands because of the alterations in gravity allows a more realistic approach to how the Nehel (or the angels and demons for that matter) could have evolved into winged beings.

And, well, the only obvious representation of God would be a genetic engineer. Clearly. Though giving him OCD and making him a teenage prodigy was a nice touch, don’t you think? 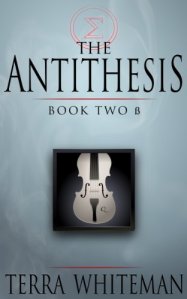 Your main character, Qaira Eltruan, is one the most temperamental, reckless bastards I’ve ever come across in a book. He’s killed so many people and is even responsible for the collapse of his own society. How did you come to create such an unlikeable character, and yet still allow the reader to empathise with him, even like him (I like him; I can’t explain it).

Qaira is an enigma. He took a lot of planning. And although he’s an arrogant self-righteous bastard, he’s necessary. You can’t explain why you like him because we’re taught throughout our entire lives that some actions are good while others are, well, not good. In our functioning society this might be true. However for a project that deals with an underlining theory that good and evil doesn’t actually exist, Qaira is the supporting evidence. He’s neither evil nor good; he’s a moral nihilist. He does what suits him and isn’t necessarily restricted to any forms of moral principles. But his goals aren’t usually sinister, and he does have the capacity to love and care for others. Actually, his love for Leid is proof enough that he does in fact have a heart. He would do anything for her.

He and Yahweh also have a very interesting friendship. Despite being complete opposites – one a benevolent leader who is bound to his moral principles, the other a reckless temperamental ex-Regent who frequently walks the line between villain and hero – they respect each other and understand that their existences are necessary.

TA purposely places readers into uncomfortable and sometimes appalling situations in order to make them question how they themselves would react. We have plenty of ethical guidelines–one specifically being that ‘killing is intrinsically wrong’ (thanks Kant), but in some situations is it actually wrong? Could we honestly say we wouldn’t fall apart or lose our sense of morality in moments of grief, despair or fury? We can’t truly hate Qaira because despite all of the horrible shit he does throughout the series, there’s always a reason for it.

The next book – Three Beta – will be the last in the series. Do you have any plans for future projects?

I already have two books of a new trilogy completed, which will be out sometime in 2013-2014. It takes place in the TA multiverse and explores all of the things TA fails to explain (much because Qaira knows nothing about them). This is a prelude to The Antithesis, and the title of the series is called The Sanctuary.

I am also currently working on a stand-alone science fiction novel titled The Key of Ascension. It’s a clash of steampunk and dystopian/apocalyptic with a strong emphasis on genetics/eugenics. Very violent and not for children.

Very violent and not for children? Awesome 🙂 I can’t wait to check out the new books. Thanks for taking the time out to chat on Violin in a Void!

Links to my reviews of the books in The Antithesis series

2 thoughts on “An interview with Terra Whiteman”