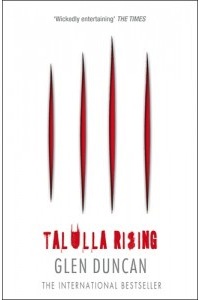 The Last Werewolf ended with a lot of drama. Talulla was revealed to be pregnant, something no one thought was possible. Grainer knew all about Ellis’s plans to subvert WOCOP, save the werewolves and kill Grainer, so Ellis got killed instead. It looked like Jake and Talulla would both get their heads cut off, but then Cloquet pitched up in a bit of a deus ex machina and shot Grainer as revenge for killing Cloquet’s lover, Jacqueline Delon. It suddenly looked like Jake would survive, but that seemed a little too good to be true so I wasn’t surprised when Grainer managed to kill him with one last shot before dying. Talulla escaped with Cloquet’s help, and he became her handler (like Harley was for Jake)

Book 2 opens on Cloquet and a heavily pregnant Talulla hiding out in a cabin in the woods. Being a pregnant werewolf is a particularly painful experience (“biology made me its punchbag”), but Talulla gives birth much sooner than expected. Unfortunately, her son is immediately kidnapped by vampires. Luckily they don’t hang around so they miss the birth of a twin girl.

Talulla names the baby Zoë and heads out, determined to save her son – who she names Lorcan. She assumes the vampires have kidnapped him for their Helios Project – based on the discovery that a werewolf bite can grant immunity to sunlight – but the truth is worse. A small group of fanatical vampires believe in a myth about an ancient vampire named Remshi, the oldest of their kind, who reappears every few hundred years and has the ability to walk in the sunlight. To reach his full power, he has to drink the blood of a werewolf. Talulla has only a short time to find her son before they sacrifice him.

Besides taking on vampires and looking after an infant, Talulla has to worry about WOCOP, which found itself a psychopathic new leader after the loss of Grainer and Jacqueline Delon. It’s a story that manages to be even more violent and intense than the first one. And I really like it that way.

If I had to pick just one thing I liked about Talulla Rising, it’d be this quote:

Keep reading, Lu, Jake had advised. Literature is humanity’s broad-minded alter-ego, with room in its heart even for monsters, even for you. It’s humanity without the judgement.

But, luckily, I get to say as much as I want about why I enjoyed this book. Although I wasn’t blown away by The Last Werewolf as many readers were, I liked it well enough and I was optimistic about the second book because I thought Talulla’s narration might be more to my taste. And it is. Jake was old-fashioned and philosophical, so while I liked his insights I found his style a bit overwrought and eventually tiring. Talulla, born in the 20th century, is a bit more straightforward and her story is much more dire, giving her less time for introspection. However, we still get some of Jake’s more literary insights as Talulla quotes from his journals. The best of both worlds. There’s even a note about Jake’s possible sexual relationship with Harley, which is something I thought should have come up in the first book.

For me, Talulla also better illustrates the realities and paradoxes of being a monster. It’s clearly an important theme for this series and a major part of Jake’s character, but they both knew Talulla was the better wulf. Also, we mostly saw Jake killing strangers or enemies, and we learned of all the charity work he’d done to balance out all the murders. Talulla has not yet had the opportunity to balance out her kills, she speaks more about how the kill is better for her when it’s worse for the vicim, and there is the ever-present threat of her killing people she – and the reader – cares about. Because for werewolves, “nothing compares to killing the thing you love”. Jake made an effort to be less of a monster by, for example, avoiding women he could fall in love with. Talulla, is forced to consider the full extent of her monstrosity. Is there anything, she asks herself, that she wouldn’t do?

Throughout the book she thinks about being a “Very Bad Dirty Filthy Little Girl” – she’s always done bad things, and she’s always enjoyed it. Now, she’s faced with the prospect of killing and eating her own children and enjoying it even though she’d hate herself for doing it. She wasn’t sure if she wanted them, was worried that she wouldn’t love them and when the vampires take Lorcan she doesn’t make much of an effort to save him; the guilt of which haunts her from that moment on. She thinks about how everything would be easier if she knew for sure that he was dead and she didn’t have to risk her life to rescue him. She berates herself for thinking about sex (or having really good sex) while her son is missing. What kind of a mother is she?

She’s a bad person who gets a kind of superhuman (or rather, inhuman) enjoyment from being bad and although she doesn’t often feel guilty about her sins, it bothers her that she doesn’t have that guilt. It’s a tangle of self-conscious immorality from which she will probably never find any peace.

In addition, Talulla endures terrible pain and suffering at the hands of others – a monster at the mercy of other monsters. Although determined to do whatever is necessary to save herself, she admits that she is no better, and is arguably even worse that the people doing unspeakably cruel things to her. It’s just that she’s suddenly on the receiving end. And as the reader I like her and root for her because she’s the protagonist, but I also know she’d have lots of fun murdering and eating me, she’d enjoy it even more if she could make it extra painful and terrifying, and afterwards she wouldn’t feel guilty about it. At most she’d feel bad for not feeling guilty and I’d just be another ghost in her soul.

It’s because she’s so scary that I find Talulla to be a wonderfully dark, twisted character, and not only as a kind of literary exploration of the werewolf as a monster. She’s also an action hero, a dutiful daughter, a new mother, a friend, a lover, and all these things come into play. I particularly liked the scene where she and Cloquet join two special forces agents in a house with 5 butchered bodies. The agents are weirded out by the fact that she’s carrying Zoë, and leaves when the baby starts to cry. But Talulla needs information, so she starts breastfeeding little Zoë while she and Cloquet search for clues amidst the gore. It’s nothing if not practical. Later, Talulla leaves Zoë behind and boards a flight to go rescue Lorcan, but the flight has unexpected consequences for her as a new mother:

The flight’s other reality slap was that I’d given no thought to having suddenly stopped breastfeeding. By the time what would’ve been Zoë’s third consecutive feed had come and gone the unsuckled milk had started a knifey protest. Look, I know we’re on a mission – but would you mind if we tried to find somewhere that sells breast-pumps when we land?

I love that Duncan doesn’t make Talulla a weak, vulnerable woman in need of protection just because she’s a new mother. Lactating and looking after a baby are just two items in a list of other practical concerns like getting guns and booking flights. She heads out with a bunch of people – most of whom aren’t nearly as badass as she is – goes into dangerous situations and rips people’s arms off. She gets help when she needs it and sometimes needs to be rescued, but she’s just as capable of saving herself too. Another favourite, and unexpectedly touching scene is when Talulla’s trapped in a particularly harrowing and almost hopeless situation, and imagines her mother (who was also a “Very Bad Girl”) guiding her through the violent kill that’s required for her escape:

My mother said: Be accurate, angel. Believe you can do this, and be accurate. I’m so proud of you.

So yeah, I’m impressed with this book. It’s got everything I liked about The Last Werewolf – the monster/wulf themes, the violence, the sex, the action, the danger – and it improved on what I didn’t like – the overwhelming intensity of Jake’s style. It’s also got way more female characters (the details of which would constitute a spoiler) and does lots of interesting things with the idea of a woman as a werewolf. It’s not brilliant – there are small things that bug me and on the whole it just lacks a certain something – but it’s still a pretty amazing book. Definitely the best vampire/werewolf book I’ve read. I’m looking forward to the final book, By Blood We Live, which is actually being published TODAY.