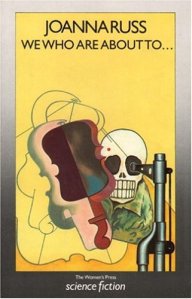 Title: We Who Are About To...
Author: Joanna Russ
Published:  1975
Publisher: The Women’s Press Science Fiction
Genre: science fiction
Source: own copy
Rating: 5/10

A passenger space ship crash lands on an uninhabited planet. The eight survivors have no way of sending a distress signal and no hope of being rescued by a passing ship, so they start making plans to colonise the planet. One of them – an unnamed middle-aged musicologist who dislikes her companions – points out the absurdity of this. They have no technical skills, a small food supply, and almost no survival gear. The ship was programmed to crash on a ‘tagged’ planet where the air, gravity and temperature are similar to Earth’s, but tagged planets aren’t necessarily colonisable planets. In short, the narrator argues, survival will be horrific if not impossible, so instead of trying pointlessly to live, they should prepare to die.

This does not go down well. The narrator’s dissent turns the other survivors against her, and they try to force her to submit to their plans, which include making babies as soon as possible. It’s frighteningly ridiculous. They want to build a civilisation but they’re too scared to drink the water. They have no idea how they’re going to eat once their food supplies run out, but they want kids. None of them seem to have considered what their lives will be like if they somehow managed to live. Only the narrator is that realistic:

Unfortunately, the other characters misinterpret her feelings. They accuse her of being a coward who just wants to give up. They think she wants to die, or that she wants everyone to commit suicide. None of them realise that survival is impossible, and if anything they’re all in denial about the certainty of death. The narrator doesn’t want to die – she has many opportunities to kill herself but doesn’t. She just knows that she will die soon and if no one will listen to her, she wishes they would at least leave her alone to come to terms with death.

But they won’t. They watch her closely to make sure she doesn’t try to run off, and start talking about which man and woman should conceive first. The two younger women who survived are fine with this, but for the narrator it means that she’ll eventually be raped, and possibly die in childbirth because she’s too old to give birth safely.

In their situation of course, the law no longer applies. And in this suddenly primitive context we find that the characters get reduced to the materiality of their bodies. It’s suggested that the women be kept safe because they’re needed for childbirth. Lori, a twelve year old girl, suffers constantly from allergic reactions with little or no means of treating them. Her father Victor is chosen to create the first child because he’s the oldest and his clock is ticking. Alan Bobby, a hulking dim-witted footballer, suddenly realises how empowered he is because of his size. In one scene, a woman, Nathalie, argues with him about wasting water. She’s naturally assumed a leadership role because of her determination and intelligence, but Alan Bobby suddenly finds that he has the power to get his way through violence.

It’s a disturbing black comedy, laced with absurdity with the threat of terrible violence.  The narrator is rather misanthropic, but I like that about her, especially in these circumstances. I certainly admire her forthright perspective and her wit.

For a while I really enjoyed this story. It’s a frank, uncompromising portrayal of a bleak situation. Yes, the characters can be infuriating, but I think Russ kept it balanced enough that it’s intriguing but not so frustrating that you can’t stand to read it. If anything, it’s the interactions with all those characters that make this simple premise interesting. When they’re not around, the whole thing collapses.

About halfway through when the narrator gets what she wants and goes to die alone. The loneliness and hunger soon start to affect her mind, and the narrative becomes a rambling account of her life while she hallucinates the other characters and people from her past. The story gets more layered with some world building and more information on the narrator’s character, but I’m not a big fan of surreal stream-of-consciousness writing and I found most of it dead boring. It’s a really short book at only 170 pages, but in the second half I kept checking to see how much more I had to read as the narrative dragged on. I’d give the first half of the novel four stars; the rest would get two at most. By the end I was just relieved that it was over.