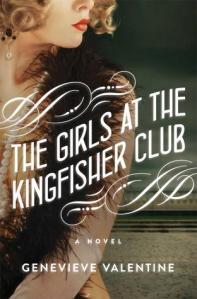 For years the twelve Hamilton sisters have been prisoners in their own home. They are the shameful evidence of their wealthy father’s inability to have a son, so he keeps them hidden from the world. No one except his staff knows how many daughters he has. He hasn’t even met some of them.

But although they never get to go out in the daylight, the sisters go out dancing in New York’s jazz clubs every night, from the Salon Renaud and the Swan, to the Kingfisher club they eventually call home. Jo, the eldest, the “General”, is the one in charge of every outing. She calls the cabs, watches over her sisters and decides when to leave. She’s the only one who speaks to their father, so she’s the one who has to break the news when he decides to marry them off, basically selling them to men of his choosing.

The girls might not know much about the daylight world, but they know a lot about men, and they know exactly what kind of men would marry a girl who’s been locked up in the house all her life – men like their father. As their leader, Jo needs to figure out a way to save her sisters, and for once it seems she can’t do it all by herself. She’ll have to turn to a bootlegger she met ten years ago for help. She’ll also have be extra careful to keep their dancing a secret, after a newspaper report about dancing girls and gin makes their father suspicious. Not only are their outings a defiance of his will, but their behaviour will spoil his plans “to sell them off one at a time as untouched goods who had never been so wild as to go out dancing”.

In case you haven’t realised it yet, The Girls at the Kingfisher Club is based on the fairytale of the Twelve Dancing Princesses. And was exactly what I wanted it to be – a relatively quick light read but with an in-depth psychological portrait of Jo and her sisters, and a close look at the whole idea of these trapped girls and women who escape into a vibrant world every night. It perfectly balances introspective character studies and the relationships between the sisters with the excitement of the dancing in jazz clubs and the tension of the threats posed by their father. It’s the kind of novel that makes me feel an intense and varied mixture of emotions, and I absolutely loved reading it.

I’m also glad that it eschewed the use of sexual violence. I kind of assumed that it would be an inevitable and discomforting part of the story, given that it’s about twelve beautiful girls and women who go dancing and drinking every night, but Valentine does not victimise them in this way. On the contrary, the Hamilton sisters are pretty street smart. They could drink most men under the table, and you don’t see them flopping around drunk and helpless. They learn how to read people and handle them, so they can spot trouble or soothe a tense situation. We don’t know the full extent of their sexual experiences (there are only references to little flings and heartbreaks) but whatever they do, you never get the sense that they’re not in control.

The girls’ strengths actually go a long way in making this a pleasant read. It could be really depressing, but the way the girls handle themselves, whether they’re having fun, being sold to men like property or alone and terrified, makes it satisfying rather than disturbing. You tense up and worry at the challenges they have to face, but every little triumph makes you smile.

This is particularly true with Jo, whose character we get to know in the greatest detail. Jo is in the incredibly difficult position of being the girls’ guardian. The blurb suggests that she’s the closest thing to a mother that they have, but the novel specifically says otherwise. It’s Ella with her kind, nurturing nature, who is more like the mother figure. Jo on the other hand is strict and commanding. Jo snaps her fingers and her sisters obey. She speaks to their father and enforces his commands. After a failed affair with a young bootlegger, Jo stopped dancing, deciding that it was too dangerous for her, no matter how much she wanted to. The result is that her sisters think she’s heartless. It’s even suggested that she’s just as much their jailer as their father is. Jo finds this deeply hurtful, especially since it’s already occurred to her.

As the reader however, you see how much Jo’s ‘heartlessness’ has done for her sisters. She describes her nickname “General” as ” the mortar that let her stand in both places at once and not fall”. She can only be the amazing sister they need by also being an authoritarian leader. It’s only because she’s so strict and careful that her sisters are able to go out every night and not get caught. She protects from their father, and it’s only when some of the girls actually have to be in Mr Hamilton’s presence as he starts trying to marry them off that they realise what a monster Jo has been fighting with on their behalf. She was the first one to learn to dance and start teaching her sisters. She initiated the first trip to a jazz club (imagine doing this when you almost never go outside), but everyone remembers it being Lou, the second eldest’s idea, because it’s hard to imagine Jo being so spontaneous.

You also see Jo trying too hard, sacrificing too much, wanting her sisters to need her because she’s become so wrapped up in her identity as the General. So part of the story involves her giving in to the things she wants, and being a sister rather than a General. It can be quite sad, but it makes for great reading. I also like the way Valentine wrote Mr Hamilton’s character. Again, she exercises restraint by not making him grossly monstrous. He’s quietly evil, with a very calm, polite manner that makes his cruelty stand out like an unexpected slap.

Overall, the book is also just beautifully written, and I highlighted many quotes on my Kindle. It’s one of the few that leaves me satisfied but also sad to leave behind because I’m not going to find another book like this any time soon. However, that does give me good reason to re-read it a few times 🙂