My favourite story for July – and one of my favourites this year – was “57 Reasons for the Slate Quarry Suicides by Sam J. Miller, from Nightmare Magazine. The story won a Shirley Jackson Award, and I can see why. It’s about Jared, a gay teenager, who has been viciously bullied by six boys at school. However, he discovers that he has a unique ability that he can use to take revenge, with the help of his best friend Anchal. What makes the story particularly interesting is that the whole thing is told in a list of 57 items – the reasons for the Slate Quarry suicides. It builds quite slowly, but the gruesome ending is just superb. 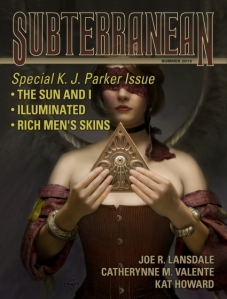 Most of the rest of my short story reading for July came from Subterranean Magazine, the Summer 2013 edition (free to download in ePub or mobi, or you can just read it online). It was here that I discovered the artful storytelling of K.J. Parker. I knew the name, but not that it’s a pseudonym for an author whose true identity has never been revealed. I hadn’t paid much attention to Parker before, but his/her story “The Sun and I” was recently nominated for a World Fantasy Award, and I wanted to check out the nominees I hadn’t read.

“We could always invent God,” the narrator says in the opening line, and proceeds to outline a plan for creating a religion. He and his friends are all highly educated but utterly broke and running out of wine, so they need  a scam to make some money. They pool their talents and their last few copper coins and design a system of belief tailored to fit people’s longings for religion, and improve upon the frustrations that have made other contemporary faiths unpopular. The result – the Church of the Invincible Sun – is an unbelievable success. With a few clever tactics and what looks like uncanny luck, the friends convince an entire city that they’re the real deal, and start raking in more gold than they ever imagined they’d have.

The absurd prosperity of the Invincible Sun unsettles some of the friends, including the creator and narrator, Eps. He even starts dreaming about the god he created, as if he actually were the prophet he pretends to be. The power of the religion just continues to grow, as if it’s somehow becoming what its creators say say it is

“The Sun and I” was part of a special K.J. Parker section in the magazine so I went on to read the other two pieces. “Rich Men’s Skins: A Social History of Armour” is a great essay on armour designs across the ages, comparing the rich warriors who owned expensive armour to common soldiers who were given mass-produced armour. Parker examines the ways in which the different classes relate to the way armour was designed, how wars were fought, and how they were perceived.

I can’t say too much about the story “Illuminated” without giving the plot away, but it immediately drew my attention to the intricacies of Parker’s writing. A professor and his female student investigate an abandoned ‘wizard’s tower’ of sorts, and examine the books that have been left there. There’s a mystery to be solved, but the story moves slowly at first, fleshing out the awkward relationship between the student and her sexist professor, and the sexism in the field of magic study. Parker engages your interest with character long before the plot gets going, and if the storytelling skill of “The Sun and I” hadn’t already convinced me to go and check out all of his/her other work, “Illuminated” did the trick.

I was pleased to find that this edition of the magazine included a Catherynne M. Valente story (I never need prompting to read one of hers) – “The Shoot-Out at Burnt Corn Ranch Over the Bride of the World”. If you liked the Old West voice Valente used in Six-Gun Snow White, you’d probably enjoy reading it here too. The story is a surreal allegorical post-apocalyptic fantasy western. In other words, it’s really weird. The US states are personified as witches an warlocks, and they’re fighting to the death to win the bride of the world, who narrates the story. It’s the kind of tale that I don’t really know what to make of, but that I enjoy purely for its quirky style and ideas.

The rest of the edition was ok, so I’ll go through it quickly. “Don’t Ask” by Bruce McAllister and W.S. Adams is memorable for its very graphic gore, as a soldier examines the body of his girlfriend, who was killed by a mine. I’m don’t like excessively gory stories, but in this case I found the juxtaposition of the shattered body and the reconstruction of the couple’s relationship appropriate. The story employs a commonplace sf trope at the end, but I like the way it resonates with the title.

“Stage Blood” by Kat Howard is a restyles Bluebeard as a stage magician who kills a woman in a glass coffin for one of his tricks, and keeps them all in a secret, magical room. Not the most memorable retelling, but a nice enough story.

“The Case of the Stalking Shadow” by Joe R. Lansdale is the only piece in this edition that I didn’t like. It uses an old-fashioned setup –  a ghost story told around lounge lit by a roaring fire, and transcribed by one of the listeners. I actually quite like this style, but the story revealed too much, in my opinion, and I lost interest.

Overall, a good edition of Subterranean. I’m very sad to see that this year’s Summer edition will be their final issue 😦