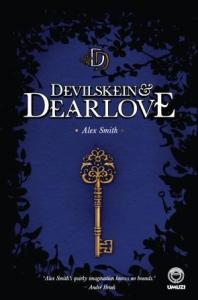 When Erin Dearlove arrived at Van Riebeeck Heights to live with her reluctant Aunt Kate, the neighbours all said she was an obnoxious brat, too thin, spoiled, wild-looking, and with a habit of speaking like she’d swallowed a dictionary. They were pretty spot on. Her face was scrawny, her sandy amber hair unbrushed, she used convoluted vocabulary with spite, and she never smiled, because she had no parents. (7)

Erin’s parents were killed in a horrific home invasion, but she tells people they were eaten by a crocodile, and she “found bits of them on the shaggy white carpet of our designer home” (7). Surly and snooty, she shuns the other children in the apartment block. In an impulsive attempt to spite them, she tries to befriend Mr Devilskein, the demon in apartment 6616.

Devilskein is a Companyman, who locks up the souls people bargained with. In his apartment are six doors, each of which lead to another six doors, each with six more doors…. And Devilskein guards the key to every one. He is supposed to keep the keys mixed up so that no one ever has a hope of reclaiming their soul, but Devilskein is a bit of a romantic, and cannot “resist the poetry of classifying his keys according to the Dewey decimal system” (44).

That said, he’s still a cruel, dangerous creature. When he sees the shining beauty of Erin’s soul and realises that she has a living soulmate too, he decides to steal her heart to replace his own ailing one, thereby giving himself another thousand years of life. He lets her into his fantastical apartment, where she meets the charming talking cricket Zhou (once a fifteen-year-old envoy from the China’s Mongol Empire), reads the lost works of William Shakespeare, swims in an underwater paradise, and tries to restore the dying section of a beautiful Chinese garden. It’s a dark retelling of The Secret Garden by Frances Jodgson Burnett, but set in the present day, on Cape Town’s famous Long Street.

Devilskein & Dearlove is a lovely piece of fiction. It has all the charm and whimsy of my favourite kinds of children’s fiction, but it’s also dark and unafraid of being brutal. It had me hooked from the first page, when we meet the first of the wonderful characters in the story. Erin would be a difficult child to handle in person, but on the page I immediately cared about her. Her arrogance is so clearly a shield for her immense grief that it’s easy to empathise with her no matter how rudely she snaps at others. When the other kids tell her about the mythical Devilskein, it’s her grief that draws her to his fearsome nature: “Whatever he looked like, she doubted anything could out-monster her hidden-away grief… if he really was a proper monster (not just a hideous recluse), perhaps he could swallow her and her stupid sad heart up” (22).

Devilskein is a combination of unnervingly likeable monstrosity. He looks scary – there are tiny words carved into his face, and he’s missing an ear. He lets Erin  in only because he literally wants to steal her heart. He’s a demon with an apartment full of souls, and on top of that he’s hiding a very twisted, dangerous secret. But he also has a big brown poodle named Calvados, he’s good friends with Zhou the cricket, and he loves his vast library of keys like a bibliophile loves signed limited editions. We’re told that “[t]hough thoroughly cruel, he was also thoroughly cultured, and as much as he was lethal, he was equally a romantic” (44).

His unusual relationship with Erin gives her a sense of purpose and enlivens her with fantastical intrigue. She still avoids dealing with her grief, but she starts to come out of her shell of anger and arrogance, and take an interest in things. Her Aunt Kate plays a big role too. Although happily unmarried and child-free, Kate is remarkably patient and caring even when Erin is being difficult. She’s a successful artist, and helps Erin discover an uncanny talent for drawing.

Adding to the feel-good vibes is the immensely likeable Kelwyn, who responds to Erin’s hostility with unflappable friendliness:

The saviour of all manner of damaged frogs, snakes, insects and plants, Kelwyn did not have it in his nature to be petty; he was a generous, warm, good-humoured soul. Nevertheless, he did possess a naughty streak. (15)

Kelwyn teases Erin for being grumpy, but he’s terribly worried about her when she goes to Devilskein’s apartment, given the frightening rumours about him. We’re told early on that Kelwyn is Erin’s soulmate, which I found cheesy, but I couldn’t be too bothered what with Kelwyn being so likeable (he spends a lot of time rescuing dogs and cats around the neighbourhood) and all the quirky fantasy going on.

But it’s not all sunshine and happiness, and I wouldn’t like it if it was. Although Erin starts to recover, she never stops using the absurd story she made up about rich parents and a lavish home. If anything, it seems that, having discovered the wonders in Devilskein’s apartment, she’s letting the fantasy of her past replace the reality. Furthermore, Kelwyn really does have a very good reason to worry about her, not just because of Devilskein, but because Erin starts sneaking into his apartment and finding things that should stay locked away.

I don’t want to reveal more for fear of spoiling the story, but I will say that I love the way Smith handles it. Even as things start going well in Erin’s life, there’s an undercurrent of real danger. It’s not that I want her to suffer, but the threat gives the story intrigue and drive. It also gives weight to Erin’s decisions. She enters the story as a victim, lashing out in response to what has been done to her, but the story that follows happens because of the actions she is able to take. With the help of the people around her, she starts to take charge of her life rather than wallowing in misery. Many of her choices are good, but some of her behaviour is decidedly unhealthy, and she makes some awful mistakes. And one of the things I really love about this book is how seriously it takes Erin’s decisions. What she does has real consequences, whether good, bad or catastrophic. She doesn’t get off easily just because that would be nice and this is a children’s novel.

What also brings this book to life is the way it’s filled with the sounds and activities of Long Street. It’s set almost entirely in the apartment block, and Smith frequently adds in the sounds the characters would be hearing – the traffic outside, the howling South Easter, a baby crying, a boy throwing a ball against the wall. At any moment, the narrative might pause to give us a glimpse of what the non-POV characters are doing – Kate shaving her legs, Kelwyn tending to his plants, a neighbour cooking dinner. Rather than interrupting the tale, I thought these details helped flesh out the world of the novel.

If I have any criticisms of Devilskein & Dearlove, it’s only that the novel introduces a sense of vibrant cultural diversity that it then neglects. We learn that Van Riebeeck Heights is home to a diverse bunch of residents, much like Long Street and Cape Town as a whole. We’re told that Kelwyn’s best friend is a boy named Sipho, who rescues animals with him. But what we end up getting is a novel without any significant PoC characters. With the exception of Zhou the cricket, other cultures appear only through names or symbols (like the aroma of curry), and except for one brief appearance, Sipho is just a voice on a walkie-talkie.

That said, this is still one one of the best books I’ve read this year. It’s enchanting, beautifully written and adventurous. I personally love how dark it can get, but also that it balances that out with simple pleasures and heartwarmingly happy moments. Highly recommended.