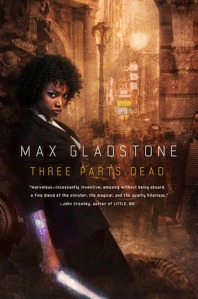 And so we come to the final part of the Three Parts Dead read-along. It’s been a relatively short one, compared with the longer books and more intensive discussions I’ve had with previous readalongs, but I’m so glad that I finally got started with this series. Clearly, I’ve been missing out.

Our host for this part is Lisa from Over the Effing Rainbow, so be sure to head over to her blog for links to everyone else’s.

SPOILERS for the whole book, of course.

So we finally got all the facts behind whodunit – and how, and why… What did you think of the epic(sized) reveal scene?

Pretty awesome for the most part! Things got really exciting from the moment Cat called in the Blacksuits to take down Tara and the Stonemen; I could just imagine the doom-laden thumps of them landing on the building before they broke in. Of course the fight that followed was rather one-sided, but eventually Tara steps up and starts saving the day with her incredible lawyering 🙂

I was wondering what the hell was up with that flying Cardinal. Admittedly, I thought that was a bit ridiculous until he burst in and starting battling Denovo. No surprise to find out that Denovo was behind the whole thing, although I feel a bit daft for not guessing at the possibility of stealing a god’s power to become a god. We’ve been told from the beginning that soulstuff gets passed around on a daily basis and that gods just have a lot more of it, with more skill at manipulating it. The God Wars involved humans wresting power from the gods, and of course Denovo has his own godlike scheme of attaining power by stealing it from his underlings. How did I not see this coming?

I also made a couple of bad guesses as to how things would turn out. For a little while, it looked to me like Tara was going to be transformed into Seril and Abelard would become Kos. There was never any time for a romance to develop between them, but it had seemed ike a possibility, so it seemed fitting that they would turn into this divine power couple. In retrospect though, that would have been a terrible ending – the book addresses issues of consent and using other people for your own gain (more on that later), and if Tara and Abelard became gods it meant they would lose at least a part of themselves.

Anyway, good ending. I absolutely loved the way everybody turns to attack Denovo.

My only criticism is that it’s a tad clunky in the way mystery novels often are – the villain and the investigator step up to explain the entire plot to us. It’s an explanation I badly wanted and needed, but it means there’s rather a lot of exposition in this scene

Oh, and David was a boring plot device.

Surprise! We found Kos. You’ll never believe where he was… Or did you?

Nope, didn’t see that coming at all! Which I guess is one of the reasons it was such a good hiding spot, but I’m not entirely sure how I feel about it. What if Abelard had dropped his cigarette and was forced to light a new one (instead of passing Kos’s flame on by chain smoking)? He’s possibly the most addicted smoker I’ve ever come across, but there were several occasions in the book where I was sceptical about the fact that he still had his cigarette. I guess he hung onto it because of Kos’s influence?

Elayne Kevarian proved to be even more devious than we suspected. What do you think of this Craftswoman now that the dust is settling? Sympathy for Denovo, or victorious fist-pump?

Fist-pump, definitely a fist-pump. And a high-five. With a “Whoop!” for good measure. That guy was an ASSHOLE. I was disappointed by the possibility that Denovo would just rot in jail, and thoroughly pleased when Ms Kevarian killed him instead. Initially I was hoping Tara would be the one to take him down, but what Denovo did to Kevarian was much worse.

And I still like Elayne. I never thought that she was squeaky-clean. Same goes for Tara. I mean, they are lawyers.

I did a little checking and the second book in this series seems to feature a whole new cast, though it’s still set in the same world. Do you think this one wrapped things up for Tara, Abelard and company well enough, or are you wishing for more? For that matter, will you read on?

I’d love to read about these characters again, but I’m satisfied with the way things were resolved. However, I would have liked to know a bit more about Abelard and Cat’s history.

And yes, I’d keep reading. I liked Gladstone’s characters, especially his female characters. He’s also got a really fascinating magical system here, and some wonderful worldbuilding. It’s clear that this world isn’t monolithic either – it’s much more realistic in that different places have developed in their own ways, with their own belief systems and politics. I’d love to see what else he’s come up with.

There were a few things that bugged me – minor issues with the writing that I would have liked to tweak, and details or conflicts that I wanted Gladstone to develop a little further. However, none of this was bad enough to really bother me, and it’s a fantastic debut.

One of my favourite scenes was when Raz woke up to find Cat feeding him and criticised her for not getting his consent. What does she know about his feeding preferences? Maybe it’s been years since he drank a human’s blood and now she’s essentially forced it on him. Granted, Cat’s not in total control of herself in this scene, but I don’t think the issue of consent would occur to her even if she had been. She’s operating on the assumption that he’s a vampire, therefore he must want her blood. I think it’s also important to consider that this is not simply about food. In Cat’s first scene, her vampire addiction is strongly associated with sex and drugs, suggesting that giving her blood to Raz is akin to sexual assault or forcing him to take drugs. And lets not forget that she’s doing all of this purely for her own pleasure.

The issue becomes even more tangled when we take into account the fact that Cat only went to Raz because Tara manipulated her. How culpable is Tara? And what if it had been a more serious issue, such as actual sexual assault? I’m also reminded of the scene when Ms Kevarian pulled Tara into a dream without her consent; when Tara questioned it, Ms Kevarian replies bluntly, “You are my employee and my apprentice, Ms. Abernathy. You’ll find there is little I cannot do to you, your notions of the possible notwithstanding.” Tara lets the issue drop, but I was actually hoping she’d wrestle with it a bit more, because WHAT THE HELL?

I think it’s apt, then, that at the end Tara decides that her own actions during the case were too unethical for her to continue working for Kelethras, Albrecht, and Ao. Although I really wanted her to be a kick-ass lawyer for a powerful firm, I admired the way she’d reflected on her actions and chose different path despite the fact that she enjoyed the work. I wouldn’t say that she’s as bad as Denovo, but in her field of work, manipulation does pose quite an ethical conundrum, and I think Tara is wise to think about it carefully before working for the firm full time.