Last night was the launch of Green Lion by Henrietta Rose-Innes, and I think it’s quite possible that I was there because of this gorgeous cover: 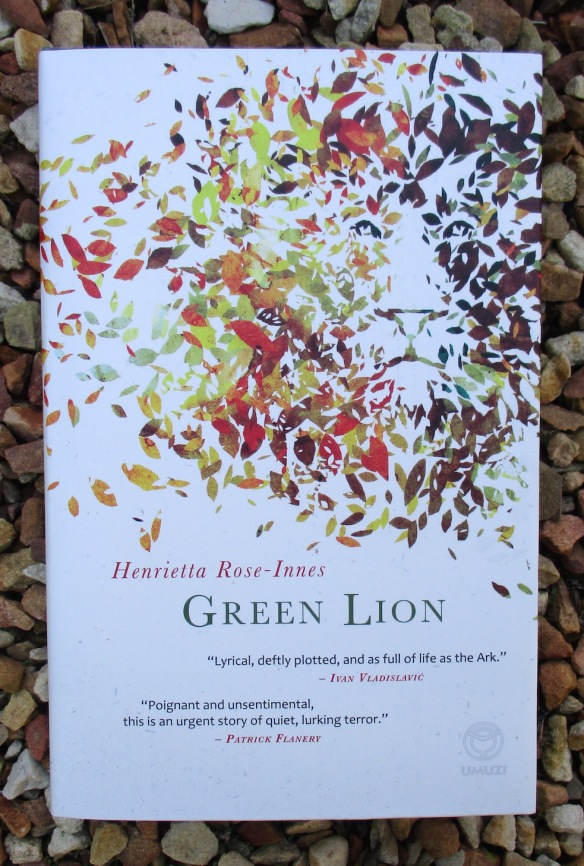 I splurged on the first edition because it’s a stunning piece amidst the generic or boring covers that most books get, and because I’ve slowly been building a collection of favourite and beautiful books in hardcover. For me, the cover can be a major selling point, the reason that I’ll spend extra for the best possible edition instead of waiting for it to hit the bargain bins, opting for a cheaper eBook (if there is one) or borrowing it from the library.

Having bought a first edition, I couldn’t pass up an opportunity to get it signed, so off I went to the Book Lounge, where some dedicated soul had reproduced the cover on the window:

I wasn’t just there to indulge my book fetish of course; I love hearing authors talk about their work, and Rose-Innes had a great discussion with Hedley Twidle, a lecturer in English Language and Literature at UCT. 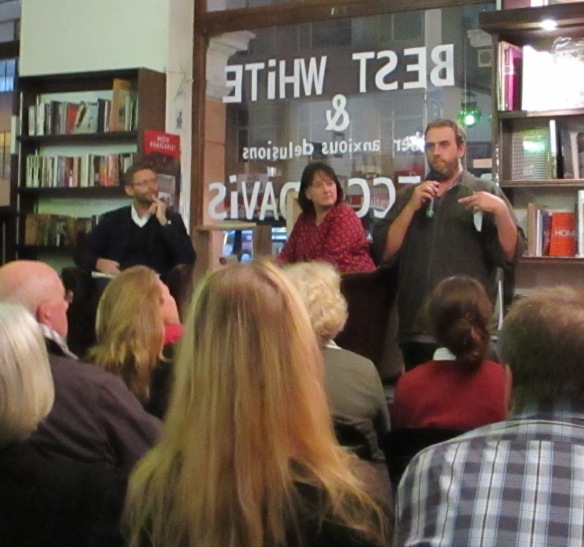 You can read Twidle’s review of Green Lion over at Books LIVE. I loved the observation he made at the beginning of the conversation: he referred to Ivan Vladislavić’s quote on the cover, which says that the novel is “as full of life as the Ark”, and noted that the ark is, of course, full of the very last of all types of life.

That grim paradox seems perfect for Green Lion. It’s set in a future where many more wild animals and environments have been lost, and Table Mountain has been fenced off as a kind of ark where surviving species are preserved. Rhodes Memorial has become a research institute where attempts are being made to bring animals back from extinction, like the attempt to bring back the quagga. It’s the home of Sekhmet, the last living black-maned lioness, at least until she mauls someone and escapes. Con, a friend of the man who was mauled, travels up the mountain to track her down.

This was the inciting image, says Rose-Innes – a man travelling up a mountain, finding revelation, and coming back down. What she did then was fill in all the human impulses leading up to that. She described the story as wedge-shaped – it begins with all the chaos of human complexity, then narrows to focus on one moment of disaster and transcendence. 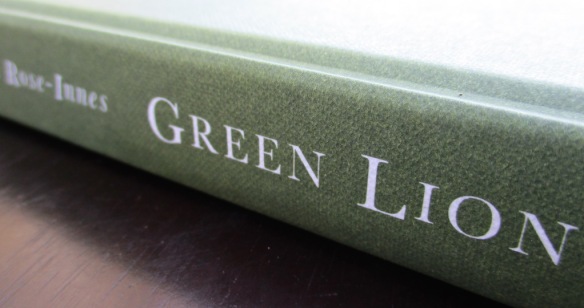 It’s also a novel about Table Mountain and Cape Town, but she sought to subvert the usual images and approach it from a fresh perspective. The wilderness she depicts is hybrid and corrupt, abutted by human construction. Having destroyed so much, people are now fenced off from nature in an attempt to save it. Rose-Innes describes it as the poignant human impulse to stop death, but emphasises that that cause is fraught with contradiction. We seek to preserve animals not for their own sake but because of the emotional and symbolic meaning they hold for us. Animals are fetishized and idealised, symbolising what is beautiful, meaningful and lost, but these ideas are divorced from the reality of the animals themselves. We need to rethink our ideas of pristine nature, which often exists in isolation from nature. I’m guessing then, that this is how a man gets mauled in the beginning of the novel – because his idea of the lion is a fantasy far-removed from the reality of a dangerous carnivore.

The term “green lion” comes from a similar sort of mysticism. In alchemy, Rose-Innes explained, green lion (possibly sulphuric acid) is a substance used in the creation of the philosopher’s stone – the ultimate goal of alchemy. The reference to this fruitless quest parallels the implausibility of bringing dead things back to life in the novel.

The novel is a bleak vision of loss, says Rose-Innes, and that makes me a little apprehensive about reading it, because environmental destruction and extinction are issues that I find deeply disturbing. At the same time though, I’m fascinated by the portrayal of our relationship with animals. Our use of animals as tourist attractions has always bothered me. I hate zoos. I’ve never been especially interested in game drives. I love animals, so I’m grateful that these things play a role in conservation, but most people aren’t interested in conservation for its own sake; they just want to protect the animals they like. So it’s always the beautiful or majestic endangered animals that are chosen to represent conservation projects, because no one would care about some dull brown bird or ugly frog, regardless of its role in the ecosystem. And what happens if we lose that emotional connection to animals and environments? There’ll be no respect for life to back it up.

So, death and futile conservation. Not a happy subject, but I’m keen to see how the book tackles it. Perhaps the beauty of the book itself can help me handle whatever lies in its pages.