I’ve decided that Wednesdays will be dedicated to short fiction.

On Sunday I had the displeasure of spending seven hours at a small community market trying to sell books and jewellery and making no money whatsoever. The day would have been a total failure but it presented me with one of those increasingly rare occasions where I have nothing to do but read. I had expected as much, so: Kindle, short stories. 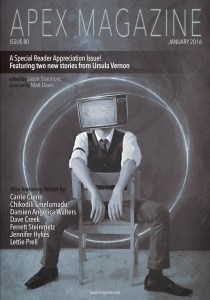 My favourite was ‘Razorback’ by Ursula Vernon, in issue 80 of Apex Magazine. It’s a retelling of a folk story known as Rawhead and Bloody Bones. An odd thing about this piece of folklore is that it has two very different incarnations in the UK and the American South. The story originated in Great Britain, where Rawhead / Tommy Rawhead / Rawhead and Bloody Bones is a bogeyman with a scalped head who is used to frighten children.

Somehow, when the story migrated to the American South, Rawhead became a razorback hog befriended by an old witch. When Rawhead is killed by a hunter, the witch is devastated at the loss of her only friend, and brings him back to life as a bloody-boned skeleton with a skinned head to take revenge. Ursula Vernon recommends reading S.E. Schlosser’s version of the tale, which is a proper piece of folkloric horror that borrows from Little Red Riding Hood: “[W]hat have you got those big eyes fer?’ the hunter asks, when the undead Rawhead comes for him, and the boar replies, ‘To see your grave’.

Vernon’s version, based on the American tale, is more heartfelt tragedy than horror. It’s not as gory and, like most retellings, ‘Razorback’ brings a sense of humanity and realism to the folklore, which Vernon does it particularly well. Rawhead is an unexpectedly charming, polite boar, as the witch Sal finds out, since she has the capacity to hear him speak:

“I see your momma raised you to be respectful,” said Sal, rocking.
Have to be ma’am. If you aren’t, she rolls over on you and squashes you flat.
“Huh!” Sal rocked harder. “Not a bad notion. Know a few people who couldn’t used a good squashing back in the day.
It does make you think before you speak, ma’am. He rolled a beady little boar eye up at her. You cook good cornbread, ma’am. Can I stay with you a little while?

When Rawhead is killed, Sal is not merely an angry and vengeful witch – she’s a lonely woman in mourning for a dear friend. The resulting story is not straightforward: things don’t go as planned and because she’s not accustomed to using violence or black magic, none of it comes easily to her, regardless of her determination. The horror elements are there, but the story is touching rather than creepy; one of those wonderful pieces of fiction about animal–human friendships. Readers who dislike or are wary of horror won’t have a problem with ‘Razorback’.

I also like Vernon’s take on witches, which I’ve also seen in her other fiction: they’re rock solid, independent, knowledgeable women who provide valuable but often taboo community services (like abortions) and are frowned upon as a result.

People want a witch when they need one, but they don’t much like them. It was a little too easy, when you saw Sal go by, to remember all she knew about you. […] She was a good witch and a decent person, but decent people aren’t always easy to live with.

“Razorback’ is accompanied by an in-depth author interview by Andrea Johnson (the Little Red Reviewer), so you can get a bit more insight into the story, which I always like to do. The edition also features a novelette by Ursula Vernon, titled ‘The Tomato Thief’. It’s also about a witch, so yes please.