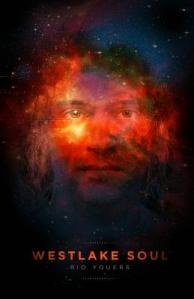 Westlake Soul used to be a surfing champion. He was tanned, toned and gorgeous. He and his beautiful girlfriend were in love. And then a surfing accident left him with crippling brain damage and for two years he’s been in a vegetative state, with his once athletic body turned to skin and bone.

On the positive side, the accident also turned him into a genius with remarkable mental abilities. Westlake can’t move his own limbs, but he can astral project, sending his soul out wherever he wants to go. He can explore his own psyche as he would a landscape, he can read minds, and exert minor mental influence on others. With all these abilities, he’s like a superhero.

However, none of his powers can give him the human interaction he longs for. He watches over his family like a ghost. He cannot hug his heartbroken parents or comfort his sister. He can’t move a muscle to give his girlfriend some sign that he’s still in there somewhere. He can’t show his caregivers how much he appreciates what they do for him. He can’t tell anyone that he feels and hears everything, even though the doctors said that this is impossible. The only creature Westlake is able to speak to is Hub, the family dog.

And if Westlake thinks of himself as a superhero, he certainly has a supervillian to fight – Dr Quietus, an incarnation of death. Westlake frequently battles him in short, violent confrontations, and so far he’s managed to cling to life. But everyone loses to Dr Quietus eventually, and if Westlake’s parents decide to remove his feeding tube and end his life, the battles will become infinitely harder and soon he will lose.

Westlake Soul is an ambitious project for a writer – a novel about a person who is unable to move or speak. It’s written in first person, from Westlake’s perspective, so the entire story rests on his fragile shoulders. The challenge, I’d say, is to make something interesting out of this limited position. I have to say kudos to author Rio Youers, because for the most part, I think he did a good job.

Westlake Soul has is often a very touching novel. The story sounds like it would be boring, but it’s driven by the emotional urgency that Westlake’s condition creates, both for him and his family, and even for the dog Hub, who cares deeply for them. Westlake’s soul often watches them around the house, and thus we get glimpses of their lives and feelings. There are many scenes depicting the pain that his parents and sister are suffering as a result of his condition, but also the love that they have for him. At first they were all optimistic that he would recover, despite what the doctors said. After two years of having to care for him while he wastes away, they’re losing hope, and feel horribly guilty for it.

Of course, there’s a great deal about Westlake’s suffering as well. He’s well aware of how disturbing it can be for friends and family to even look at him, and how caring for him can be disgusting. The novel doesn’t shy away from describing the gross realities of Westlake’s body. His very situation is a nightmare – he used to tame the waves, and now he’s totally paralysed and unable to communicate, while possessing a brilliant mind and the ability to feel, see and hear everything around him. Ironically, he’s observed doctors tell his parents that his brain is effectively dead, he can’t perceive anything at all, and that there’s no hope for his recovery. It’s a disturbing concept.

Fortunately, Youers has avoided making this a dreary book. Despite his struggles, Westlake has a casual, upbeat way of speaking, full of slang and pop culture references. The serious moments are balanced out by happiness and humour. This tone does a lot to keep you reading; if it were more sombre I think it would be a depressing slog.

I like the science fantasy/superhero/supervillain thing, although it’s not quite what’s suggested by the blurb, and I think Youers could have done more with it. There’s a touch of science, such as the idea that the accident shut down the 10% of Westlake’s brain that allowed him to function as a normal human being, but awakened the 90% that most people never use, thereby giving him superpowers. The superhero thing, however, is more like a way of perceiving himself and his battle to stay alive. Since he cannot manipulate anything in the physical world and has only a tiny amount of mental influence over others (sort of like giving their minds a push) he can’t do anything you’d consider heroic. He claims that he’s not interested in saving the world anyway; he just wants to surf again. His fights with Dr Quietus, are only to save himself – he doesn’t stop anyone else from dying. Dr Quietus himself gets very little time on the page, and he has almost no lines.

I would have liked it if Youers gave Quietus more of a presence in the novel. There are some philosophical and spiritual musings, and Westlake and Quietus could have engaged in similar discussions. The battles between the two of them aren’t all that exciting and they feel out of place. Westlake and Quietus fight in locations like the skies over Tokyo or an abandoned factory. It feels like these scenes came straight out of an action movie. On the other hand, it makes sense that Westlake might see himself as a superhero fighting action-packed battles with a supervillain – after all he is a 23-year-old surfer. I just wish Youers had handled the concept differently.

This brings me to some of the other issues I had with the novel. I don’t think it was a good idea to make Westlake a genius. He doesn’t seem like a genius. He just seems like a guy with some amazing mental abilities. Although he’s more knowledgeable, he doesn’t show signs of being especially smart. You’d think that such a phenomenal change in intelligence would change the way Westlake thinks about the world, but his psychology seems to be pretty much what you’d expect from a 23-year old guy in this situation.

Then there’s the language. Like I said, the tone is essential to keeping the reader engaged, but Westlake’s speech is full of weird, dated slang and references. Like “too cool for school”. The novel is set in 2011 and there’s plenty of contemporary stuff about Facebook or the latest music, but there are also times when it sounds like Westlake is from the 60s or 70s. It’s weird.

Nevertheless these are flaws in what is, on the whole, a solid execution of a difficult idea. It’s not great, especially with Dr Quietus’s character being wasted, but it’s good. Youers keeps the story well-paced right up to the end, which is something many writers fail to do. The ending itself was nicely done. I’m not really sure who to recommend this to though. I think that anyone wwith a friend or relative in the same state as Westlake would find it extremely painful, especially with regards to the question of switching off life support. This story essentially describes a situation in which the doctors are almost completely wrong about the patient’s condition, most notably about his ability to feel pain or hear what’s being said about him. The very idea is something that I’m sure would cause torment to those who’ve been in the same situation as Westlake’s family. I still think it’s an interesting concept to read and write about though, and there’s a great deal in this novel that’s beautiful and heartwarming, so I’d say read it if you think it sounds intriguing, but perhaps not if it’s too close to home.

Buy a copy of Westlake Soul at The Book Depository