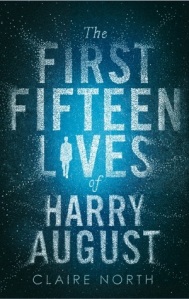 As I go through my notes and highlights for The First Fifteen Lives of Harry August I realise that this is *the* best book I read last year. It’s elegant and beautiful and pensive, which is not something I can often say of books that also happen to be fantastic thrillers. I kind of want to read it again right now, but I’ll settle for writing a review that I hope can convey what a wonderful book this is.

At the end of his eleventh life, Harry August is about to slip into his usual cosy, morphine-induced suicide when a little girl arrives to tell him that the world is ending. Both he and the girl are kalachakra – those who journey repeatedly through their own lives. When they die they return to the time and place of their birth and live again, with all the memories of the lives that came before. Because Harry is about to die and travel back to his birth in 1919, he can send the message about the impending apocalypse back through time, as later generations of their kin have been doing.

Harry’s first question is, why does it matter that the world is ending? Everything dies, after all. But the problem is not only that the world is ending, but that it is ending faster – it happens earlier and earlier every time. The fact of this suggests that one of the kalachakra is causing it by using their knowledge of the future to change the past. And as the apocalypse moves back in time it permanently kills kalachakra along the way, because if they ever fail to be born once, they are never born again.

It’s only about halfway through the book that we see Harry start to deal with this issue because for him it poses a complex ethical dilemma that the reader can only understand by first learning the story of his previous lives. So Harry takes us back to his very first birth and on through the lives that follow.

This is a fascinating and engaging story in itself specifically because Harry carries the increasing weight and knowledge of all his previous lives with him (it’s partly this factor that makes the novel superior to Life After Life by Kate Atkinson, which is based on a similar concept). In addition he is something known as a mnemonic – a kalachakra who remembers everything with perfect clarity. This has several advantages, one of which is that it makes Harry an excellent narrator who can capture the essence of what it means to kalachakra.

Naturally, it’s both a blessing and a curse. It’s an extremely difficult thing to deal with at first; in his second life he goes mad with the memories of the previous one, and commits suicide at age seven. In his third life he turns to religion for answers and, finding none, turns to science in his fourth life. There’s no rush – he has centuries to ponder existence. With his knowledge of the future and his accumulated education, it’s easy to become wealthy in later lives, but that doesn’t save him from having to live through childhood over and over again. It also raises some uniquely disturbing problems. How, for example, does the mind deal with pain and trauma in this scenario? When you cannot forget anything, and you have centuries of experience from which the most horrific moments never fade?

In addition to these sorts of psychological conundrums, Harry is faced with a multitude of ethical questions. What should he do with his knowledge of the future? Should he help people, or is it dangerous to interfere? Could he change history or is he ultimately powerless? But if he can’t or shouldn’t change the world, then what is the point of him, and of the kalachakra?

These questions plague Harry for much of the book. He gets some insight when he joins The Cronus Club, a global network of kalachakra whose main purpose is to use their abilities to generate enough wealth to support new and existing members (e.g. extracting young kalachakra so they don’t have to waste decades pretending to be kids). The Club is very strongly opposed to changing history because doing so ended the world once before. Harry initially agrees, arguing that “[c]omplexity should be your excuse for inaction” (52). But as Harry goes from one life to the next, he becomes unsure – what does any of this mean if they never choose to act, to change things?

These ideas aren’t just food for thought – they are integral to the second part of the novel, as are Harry’s experiences (some of which are pretty harrowing). Having told the most important parts of his life story, Harry then moves on to the pacier business of investigating the impending apocalypse, and the novel goes from being a kind of philosophical historical sf to a literary sf thriller. Although Harry is, in most ways, a pretty ordinary guy, being able to educate yourself for centuries and use knowledge of the future to get rich means that he has considerable skills and resources for mounting an investigation. He also happens to live at the right time in history to do something, and being a mnemonic gives him a unique advantage that determines the way things play out.

Now, one thing I love is that Harry doesn’t simply decide to save the world because that’s what you do. He can act, but he needs to decide if he will, and how. At this point it’s abundantly clear that life has very different meaning for kalachakra. Pain is significant but death is not because it just leads to rebirth. They don’t generally care about the deaths of normal, linear people, because those people will all be back again in the next cycle of their lives, even if the world is totally destroyed. They take the permanent deaths of kalachakra very seriously because the kalachakra are special, but for centuries Harry has been questioning their importance, their meaning. And when the importance of the kalachakra is called into question, we return to the question Harry posed at the very beginning – why does it matter that the world is ending? If it’s ending because one of the kalachakra has chosen to act on their knowledge and experience, is that necessarily a bad thing? The kalachakra are essentially immortals but they’re just cycling through the same lives. Are they seriously going to sit around preserving the status quo forever?

Harry wrestles with these issues as he investigates the accelerating apocalypse, and it all comes to bear on his decisions when he finds out what’s going on. This is the best thing about this book – the way Harry’s lives build on one another to drive his decisions and thus the story. The author takes the idea of the kalachakra and delves into the depths of what it means to her main character. The narrative is suitably non-linear, so that we get a sense of how Harry experiences time – all those lives piled up, cross-referencing each other across centuries. Then she puts him into a dire plot in which the things we’ve learnt about him are crucial to the understanding the choices he makes and the eventual outcome.

And it’s magnificent. Everything comes together beautifully. The slow and thoughtful first half transitions into a page-turning thriller. Harry comes up against an opponent who becomes both a friend an an enemy, someone he admires as much as he fears, and who forces him to grapple with all the questions he’s been asking about himself and the kalachakra. It’s such an accomplished novel – superbly written, poignant, sometimes heartbreaking, utterly absorbing. I want to relive Harry’s lives again, and again.