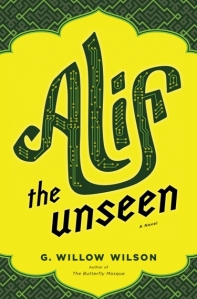 Alif is a 23-year old “computer geek with girl issues”. He’s a highly talented hacker living in an unnamed state in the Persian Gulf. He makes money by protecting dissenters from state online security in similarly oppressive countries. He doesn’t care what their ideologies are – his clients in include Islamists, feminists, communists, pornographers, human rights’ activists – he cares only about their right to freedom of expression. And he’s exceptionally good at what he does.

Then his girlfriend Intisar breaks up with him. She’s an Arab aristocrat who’s basically been slumming it with Alif, who is only half Arab and has no wealth to speak of. Although Alif ‘married’ her using an online marriage contract for Gulf men looking for sex without the sinful extra-marital aspect, this means nothing now that Intisar’s father has arranged a marriage for her. “Make it so I never see your name again” she tells Alif tearfully. Angry and hurt, Alif takes her request seriously and writes Tin Sari, a computer programme that can identify an individual ‘personality’ through their typing speed, language use, style of writing, etc. With Tin Sari he can prevent Intisar from seeing any of his online activity, no matter what computer or email address she uses. Somehow, Tin Sari works far better than Alif thought possible – it’s a computer programme with ‘intuition’, able to recognise Intisar (and by extension, anyone else) using a single sentence.

Unfortunately, Intisar’s fiancé turns out to be the Hand of God – the feared and ruthless head of state security. When the Hand finds Tin Sari and Alif through Intisar’s computer, Alif is forced to go on the run along with his neighbour Dina, with whom he’s been friends since they were five years old. For some reason Intisar sends Alif a copy of the Alf Yeom wa Yeom – The Thousand and One Days. The Alf Yeom is rumoured to be the djinn’s version of The Thousand and One Nights. As Alif runs from the state authorities and tries to figure out the importance of the Alf Yeo,m he finds himself entangled with the djinn he never really believed in and exploring an unseen world he never knew existed.

Alif the Unseen is an unusual blend of Middle Eastern mythology, Islam and science fiction, albeit just a dash of the latter. According to the Quran, the djinn (spelt “jinn” in the novel) are part of God’s creation, but contemporary Islamic belief treats them as fantasy, as Intisar describes  in her thesis on ancient Islamic literature:

The Quran speaks of the hidden people in the most candid way, yet more and more the educated faithful will not admit to believing in them, however readily they might accept even the harshest and most obscure points of Islamic law. That God has ordained a thief must pay for his crime with his hand, that a woman must inherit half of what a man inherits—these things are treated not only as facts, but as obvious facts, whereas the existence of conscious beings we cannot see—and all the fantastic and wondrous things which their existence suggests and makes possible—produces profound discomfort among precisely that cohort of Muslims most lauded for their role in that religious ‘renaissance’ presently expected by western observers: young degree-holding traditionalists. Yet how hollow rings a tradition in which the law, which is subject to interpretation, is held as sacrosanct, yet the word of God is not to be trusted when it comes to His description of what He has created.

In Alif the Unseen, Wilson gives the Quran’s teachings about the djinn more weight and brings them and their hidden world to life with an array of strange creatures (including the genie from Aladdin’s lamp!). My favourite character was Vikram the Vampire, who is not so much a vampire as some kind of werewolf or shapeshifter. Vikram is crude, insulting and very dangerous, but also noble and extremely useful to Alif in his dilemma. He’s very quick to point out Alif’s flaws though, frequently stating how weak, cowardly or close-minded Alif is. Which is true actually – Alif is powerful only when he’s using a computer. In real life he shows signs of having spent too much time alone in his room and even though he reads a lot of fantasy novels he has a tough time accepting the existence of the djinn. He’s Alif the Unseen because almost anything meaningful in his life happens online. He doesn’t even use his real name, and goes only by the handle ‘Alif’ (the first letter of the Arabic alphabet):

He had spent so much time cloaked behind his screen name, a mere letter of the alphabet, that he no longer thought of himself as anything but an alif; a straight line, a wall. His given name fell flat in his ears now. The act of concealment had become more powerful than what it concealed.

Oddly enough, Alif seems even more hidden than his friend Dina, a devout Muslim who chose to wear the veil even though her parents disapproved, and it made life difficult for her at school. I have to say, I was surprised at how much I liked Dina. She was my second favourite character, after Vikram. Dina is surprisingly bold for the kind of person who actually chooses to wear the burqa and who chastises other women for laughing in public. Although she sticks to extremely strict Islamic rules of propriety whenever she can, she tends to be braver and more steady-minded than Alif. While he’s shaking with fear, she has the fortitude to stay calm and think clearly. I didn’t agree with Dina’s principles, but I certainly admired the strength of her character.

In the classic girl-next-door tradition, there’s a touch of romance between Alif and Dina, but it’s nothing like you’d get in a novel with a more westernised or liberal setting. Things that most of us would consider to be part of daily, casual interactions between men and women take on deeply intimate, even erotic meaning here. As in other Islamic countries, women are expected to cover their faces in public, so for a woman to reveal her face to a man is a deeply personal, sexual thing. In one instance in the novel it even means that a woman will accept no other husband than the one man to whom she showed her face. When Intisar first removed her veil for Alif, he found to be such a deeply moving experience that “it took him three nights to work up the courage to uncover more than her face”.

There’s constant sexual tension between Alif and Dina simply because going on the run together forces them to cross their society’s strict sexual boundaries. They are often alone together, they have to sleep in the same room (a curtain is always put up so Dina can be hidden from view), or they accidently brush up against each other. Their excessive modesty actually lends itself to an intense yet restrained eroticism, while their lack of experience gives the novel a YA feel.

If I’ve given the impression that this is religious fiction, then don’t worry, it’s not. Some characters can get a little preachy, and I wasn’t surprised to learn that the author is an American who converted to Islam (one of the characters is also an American convert, who I imagine portrays the author’s experience in an Islamic country). The novel isn’t critical of religion, of course, but it’s not trying to push Islamic ideology either; Islam is just a necessary part of any story set in this context, and it also provides a means of working the djinn into the plot.

On the downside, I didn’t like the book quite as much as I liked the idea of it. Being a book geek rather than a computer geek, I found all Alif’s coding and programming stuff to be confusing, so I couldn’t quite appreciate what he was doing or the ways in which the author intertwined mythology and technology. In addition to that (or because of it) the novel just left me a bit cold. I can’t put my finger on why, but I just didn’t love it. Nevertheless, I think it’s a cool experiment in sf, and if you have more computer geek credits than I do, you might get a lot more out of it.

Buy Alif the Unseen at The Book Depository