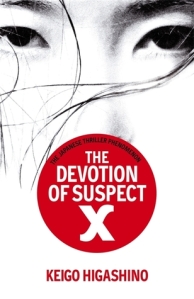 Yasuko is a single mother living a quiet life, working in a Tokyo bento shop, when her ex-husband Togashi walks back into her life. She’d divorced him after he became an abusive drunk who took her money for gambling. Afterwards, he’d repeatedly harassed Yasuko and her daughter Misato, until Yasuko changed jobs, homes and Misato’s school in an effort to get away from him. But now he’s found them again. In their small apartment, he brags that they will never be rid of him, prompting a terrified Misato to attack him. In the struggle that follows, Yasuko defends her daughter by strangling Togashi while Misato holds him down.

Mother and daughter are both prepared to turn themselves in when their enigmatic neighbour, Ishigami, calls and offers to help them dispose of the body. Yasuko is shocked that he figured out what happened and wants to help, but she knows that Ishigami – a reclusive mathematical genius – has always had a thing for her. Although he’s too shy to exchange more than a few words with her and sometimes can’t even make eye contact, he always buys his lunch from the bento shop where she works just so that he can see her.

Ishigami immediately begins instructing Yasuko and Misato on dealing with the incriminating evidence and makes plans for disposing of Togashi’s body. Soon after, the police find a body with its face smashed in and fingerprints burned off. By the time they identify it as Togashi and come knocking on Yasuko’s door, the mother and daughter have credible alibis and there is no solid evidence linking them to Togashi’s death. But the police have no one else to suspect, and Detective Kusanagi of the Edogawa police keeps poking at the problems in Yasuko’s story and questioning the puzzling circumstances of the murder. He turns to his friend Yukawa, another genius who works in the physics department at a local university and sometimes helps the police with their cases.

Yukawa, Kusanagi and Ishigami actually all attended university at the same time, and when Yukawa hears that Ishigami is the neighbour of the murder suspect, he asks Kusanagi for the address. Yukawa simply wants to get in touch with an old friend and classmate whose brilliance he deeply admired, but in doing so he starts to suspect Ishigami’s involvement in the case. The physicist is the only one with a mind to match the mathematician’s, and with Kusanagi’s help he tries to solve the problem that Ishigami has created to protect the woman he is so devoted to.

This is an unusual and interesting angle for a mystery novel. For the reader, there is no mystery surrounding Togashi’s murder – we learn all there is to know about the why, who and how in the first two chapters. Instead, it’s Ishigami’s brilliant cover-up that drives the story, as Yukawa and Kusanagi battle to find the truth. We see only fragments of Ishigami’s plan, which at first seems simplistic and sloppy, but is soon revealed to be complex and deceptive. Ishigami has never done something like this before, but he is certain that “Logical thinking will get us through this” and applies mathematical ideas to the problem as if it were an equation or philosophical dilemma.

For the sake of suspense, most of his methods are hidden from the reader until the very end. It feels a tad artificial, since the story is told from multiple perspectives (Yasuko, Ishigami, Yukawa and Kusanagi) and you are very aware of the fact that the author is being selective about what his characters say and think, or how much of their conversations are put on the page. But I thought the story worked very well nevertheless. Even if you aren’t privy to Ishigami’s plans, you get to see Yukawa and Kusanagi tackling the problem. The only irritating part is when Yukawa starts to figure out what happened, but only makes vague and provocative statements about it because he’s unwilling to incriminate his friend and doesn’t want such a brilliant mind to be wasted in prison.

There are some other interesting character dynamics at play. Yasuko starts dating an old friend, but both she and Misato are aware of how this could jeopardise their situation – Ishigami is obviously obsessed with her, so what might he do if he feels betrayed? Should Yasuko put her life on hold for someone so socially inept that he can’t even have a normal conversation with her? And how dangerous is Ishigami, a man who didn’t think twice about covering up a murder or mutilating a body to do it? The crime has been committed, but the sense of menace remains, especially when Yukawa describes Ishigami as a man who would do anything, no matter how horrific, if it was the most logical solution to a problem.

It’s quietly compelling story, somehow managing to be a page-turner with a minimum of the drama that that term generally implies. I appreciated its calm, straightforward manner and the way the plot differed from the norm. The Japanese police in the novel seem so very different from the brash cops often seen in fiction, or the overworked, under-resourced and inefficient ones you hear about in the news. The Edogawa police have all the resources they need, and Kusanagi is thoughtful and observant. He warns his partner about the danger of assumptions, when the younger officer assumes that a nice single-mother like Yasuko couldn’t possibly be guilty of a violent crime. Similarly, Yukawa warns Kusanagi about the assumptions the police are making, knowing that Ishigami could use that against them.

I like the strategic, rational thinking here, especially when it comes to the two geniuses. I only wish that the whole novel was as rigorous, because its logic fails somewhat in relation to Misato’s character. While there were only two or three technical details that bothered me in the novel, the worst one was about Misato – after she attacks Togashi, he retaliates and hits her repeatedly in the face, but at no point does she show any bruises.

Then, I felt that her character was badly neglected, which bugged me throughout the book and becomes problematic at the end. We’re always left to make assumptions about her motives and feelings, while other characters’ are described in more detail. It’s stated that Togashi had physically abused Yasuko, but whether or not Misato was also abused is not clear, although it’s very likely. Then there’s a subtle suggestion that he may have abused her sexually, which would certainly account for her fear, and her impulse to attack Togashi and help her mother kill him. Misato’s actions are what set the entire story in motion, but even in that crucial moment the focus is on Yasuko, and Misato feels secondary. For the rest of the novel, she is little more than a sullen teenager, spitting out a line here and there. She clearly feels guilty about what she did, not because Togashi was killed but because of the trouble and risk created for Yasuko and Ishigami. And yet Misato’s feelings are barely touched upon, even when we see the story from Yasuko’s POV as a concerned parent. If she talks to Misato about the situation, we don’t see it on the page.

On a related note, the police largely ignore the reasons behind the murder. The reader, of course, knows that Togashi threatened Yasuko and Misato, and several characters express relief at his death, knowing how badly he’d treated his ex-wife and step-daughter. The police, however, are more concerned with the who and how of the murder, not the why. With no one to suspect except Yasuko, they try to figure out how she could have done it, but aren’t too concerned with the glaring possibility that she killed Togashi in a kind of self-defence. Besides the fact that the police would need a motive for the case, ignoring the issue seems unkind, portraying Yasuko as a killer rather than a vulnerable person in a difficult situation.

Flaws aside though, The Devotion of Suspect X is an excellent crime thriller and an intelligent page-turner. It offers a refreshing departure from the norm in English-language fiction, not only because of the plot but because of the Tokyo setting, and the Japanese culture. The translation can be a little clunky at times, but some of that I would chalk up to a difference in style that I’ve noticed in other translations from Japanese, in both popular fiction and anime. I’d happily pick up another of Keigo Higashino’s novels, and I’d recommend that you do too.