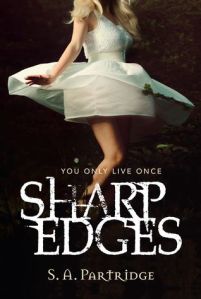 For her seventeenth birthday, Demi goes to a music festival in the Cederberg with five of her friends. Sadly, what was supposed to be the best night of her life ends up being the last, and her friends go home traumatised by her tragic death. Her boyfriend Damien feels like he doesn’t have a reason to live anymore. Ashley and Verushka (“V”) have lost their best friend. James and Demi weren’t close, but he’s torn by the fact that her death ruined his relationship with V, who hates that they were together in his tent when Demi died. Siya will never be able to forget being the one to find Demi’s body, but all his father cares about is the fact that he went to a music festival without permission.

Sharp Edges delves into each character’s mind, with every chapter taking us closer to Demi’s death and the events leading up to it. We not only get a sense of how deeply it has affected her friends’ lives, but also how a tangled mess of teenage angst, lust and longing brought them all to this fate.

And what South African author Partridge does very well is depict some of the psychological suffering of adolescence, like being stuck under the thumb of domineering or inadequate parents, juggling the various aspects of your evolving identity, being constantly awkward and angry and unsure of yourself.

As we move through each character’s POV narrative, you can also how painfully self-absorbed they all are. Each is struggling with their own issues, while almost completely failing to notice what difficulties the others are going through.

I liked some POVs more than others. Damien struck me as melodramatic while James was a bit boring as the typical bad boy hiding deep feelings under a callous exterior. Siya’s story was more interesting though, and Demi became more complex as the book progressed. At first she bothered me because some of the characters remember her as being virtually perfect – a beautiful, bubbly blonde with an endlessly sunny disposition. She even dyes her hair with a perfect array of rainbow colours. However, we eventually see that this sparkly ray of sunshine isn’t quite as lovely as she initially appears. Demi was perhaps so cheerful because she was a flighty person who never took anything seriously. And there is a problem in the way Damien idolises her as his dream girl – might things have turned out differently if he acknowledged her flaws?

It’s a tragically complicated mess of adolescent angst, psychologies, personal issues, and mistakes that can’t be easily unravelled for simple answers. It’s the kind of book that presents a great opportunity for arguing back and forth about what the characters did, what they should have done, how culpable they are, what it’s like to be a teenager, etc.

There was one major issue that bothered me though – why is there no investigation into Demi’s death? Was there an autopsy? She’s underage, dies at a music festival, and drowns even though she is able to swim, so surely the authorities – or at least Demi’s parents – would ask questions about drug abuse and drinking at the very least. I can understand why Partridge might have avoided this – it allows her to focus solely on the characters’ psychological journeys. An investigation might have gotten in the way. But it still seems strange that any legal consequences of Demi’s death are absent.

Nevertheless, Sharp Edges is a good read, and at only 130 pages you can tear through it in an hour or two.