Personal goals:
Take time to relax without thinking, I should be working.
Read a book.

I can’t seem to finish anything though. (“When are you going to write a book Lauren?” Hahahahahahaha, SHUT UP.) My last few reads – The Liminal People by Ayize Jama-Everett, The Girl With All the Gifts by M.R. Carey and Slipping by Lauren Beukes – were like hot dates that hit all my sweet spots. I disappeared into them in a haze of Oh my god, this is so fucking good, and now I want the next book to give me that same experience.

This is not an expectation I want to harbour. It’s unfair. It’s like meeting someone and wanting them to have all the qualities you’ve ascribed to your perfect partner in the isolation tank that is your mind (I absolutely do not ever do this. *coughs*). Few books are going to have that effect, and you can’t predict which ones will, especially if your tastes aren’t mainstream. It’s not just about the content or the quality of the book either, but the time you give it and when you happen to read it. Your life right now is part of the reading process. I love the title story of Slipping because the protagonist chooses to keep sprinting after she’s knocked down and broken in the middle of a race, and her heart literally starts slipping out of her cybernetically modified chest. I read ‘Slipping’ right after someone I thought was a friend told me I wasn’t worth any time or effort, and the story described, better than I could, exactly how that had made me feel. On a different day, ‘Slipping’ might have been a good story instead of a great one.

But I couldn’t know what those books would do for me, and I didn’t read them expecting to find what I did. I just opened up and got to know them for what they were. Also, it took two or three false starts before I finished The Liminal People and The Girl With All the Gifts, and it’s entirely possible that I wouldn’t have finished Slipping if I hadn’t agreed to write a review. Yet instead of giving another book the same courtesy, I sought recurrence by specifically trying to identify an exceptional book perfectly suited to my preferences in the moment. I read a few pages here, tried something else there, and did nothing but waste enough time to finish several novels.

So I reverted to the strategy that kept this blog going for years: pick something and finish it. No matter what it’s like. Even if it fails to impress me right away or there are things I don’t like about it. Nothing out there was written just for me. But my book collection is at least curated – almost everything on my shelf and the majority of the content on my Kindle is there because I want to read it. So why don’t I? Each book and short story has the potential to be something I love. I had to just pick one and give it a chance. I used to select reads according to publishing dates and reading challenges, but those don’t matter right now so I had to find other criteria. It didn’t really matter what they were if my only goal was to just bloody read a book. 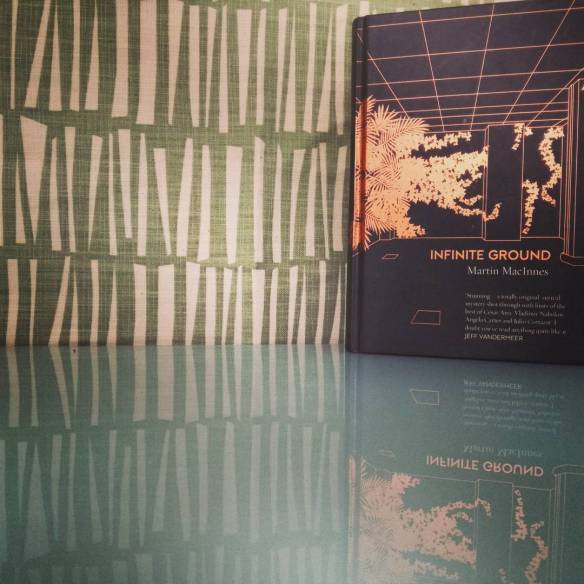 I chose Infinite Ground by Martin MacInnes. It’s the last new book that I bought. It sounds fascinating but I bought it largely because it’s beautiful, and it feels good to hold something beautiful. It also cost a lot of money that I couldn’t quite afford (and would really appreciate having back in my wallet right now), so I wanted it to do something more than sit pretty on my shelf with nothing to show but its spine.

No one seems to like this strategy. People often insist that life is too short to read bad books. They declare that a book has fifty pages or three chapters or whatever to hook them and then it’s over. Which is fine if reading is just a casual hobby, but I wouldn’t have a career if I was that fussy or demanding, if I didn’t read bad books and learn from them. Nor would I love my favourites as much as I do if they didn’t stand out against a background of mediocrity and shit. It’s no use having an attitude that says, Be great or begone.

And in my next life goal, I’ll try to be that considerate with people, too.