If you’re at all interested in serious, progressive sff, then you will probably have heard a lot about The Mirror Empire by Kameron Hurley lately; it’s the kind of convention-defying, mind-opening fantasy that all fans should be reading. Kameron won double Hugos this year, and I don’t doubt that The Mirror Empire will get her nominated for several awards again next year. She’s currently on one of her incredibly prolific blog tours following the launch of her novel from Angry Robot, and has been kind enough to make another stop at Violin in a Void. Welcome back Kameron! 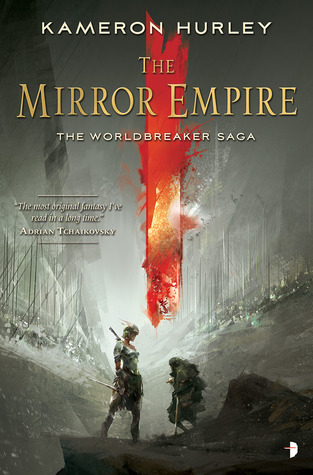 The best writing advice I ever got was to read outside the science fiction and fantasy genre and travel. There’s nothing like getting out of your everyday surroundings and plopping yourself into someplace difference to see just how much cultural baggage you’re carrying around. Here are the top five things I learned about how to build better fantastic worlds – simply by traveling around more in this one.

About the Author
Kameron Hurley is the author of The Mirror Empire, as well as the award-winning God’s War Trilogy, comprising the books God’s War, Infidel, and Rapture. She has won the Hugo Award, Kitschie Award, and Sydney J. Bounds Award for Best Newcomer. Hurley has also been a finalist for the Arthur C. Clarke Award, Nebula Award, the Locus Award, BFS Award, and the BSFA Award for Best Novel. Her short fiction has appeared in Lightspeed Magazine, Year’s Best SF, Escape Pod, The Lowest Heaven, and the upcoming Mammoth Book of SF Stories by Women.