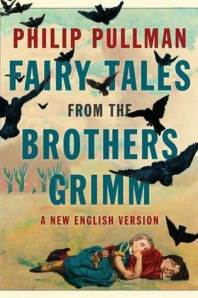 In 2012, Philip Pullman published a new edition of Grimms’ fairy tales. It’s not, as I first thought, a collection of modern versions of these tales. The Grimm brothers published seven editions of the Kinder-und Hausmärchen (Children’s and Household Tales), with the brothers collecting and editing the tales, not making them up. Pullman is essentially stepping in as a contemporary editor of an English edition.

What this means is that he hasn’t made any fundamental changes to the stories themselves – he hasn’t modernised the language, set them in modern times, or made significant changes to the plots. He describes his approach as such:

But my main interest has always been in how the tales worked as stories. All I set out to do in this book was tell the best and most interesting of them, clearing out of the way anything that would prevent them from running freely. I didn’t want to put them in modern settings, or produce personal interpretations or compose poetic variations on the originals; I just wanted to produce a version that was as clear as water. My guiding question has been: ‘How would I tell this story myself, if I’d heard it told by someone else and wanted to pass it on?’ Any changes I’ve made have been for the purpose of helping the story emerge more naturally in my voice. If, as happened occasionally, I thought an improvement was possible, I’ve either made a small change or two in the text itself or suggested a larger one in the note that follows the story.

I was just a tad worried about this; I love fairy tales, but I have found that reading the ‘originals’ can be tedious. They are very strange, frequently absurd or shocking, sometimes repulsive. Reading them has the odd effect of alienating me from them, unless accompanied by annotations and interpretations that allow me to approach the tales as a scholarly pursuit, rather than trying – and failing – to read them just for pleasure.

But Pullman has given me a fresh appreciation for the tales in their classic form. They are still full of the most insane wtf-moments – like when a king randomly decides that his twelve sons must immediately be executed if his wife gives birth to a girl, and has twelve coffins made to show he’s serious – but I enjoyed reading the anthology in a way I didn’t experience when reading an older one.

Pullman’s changes, though small, seem to have made a big difference. He uses a voice that sounds like the classic fairy tale, but feels a bit more natural to the modern ear. The details he’s added (some of his own devising, some borrowed from other versions), made the stories a bit smoother, while keeping them essentially the same. He’s chosen what he considers to be the “cream of the Kinder-und Hausmärchen“, so we’re getting some of the best stories. I think it also helps that he’s driven by plot, by the idea of fairy tales as fantastic stories that are wonderful to read because they’re so focused on what happens next.

The anthology opens with a wonderful introduction by Pullman that gives a brief history of the Grimm’s and their decision to collect and publish fairy tales. They didn’t walk around  the countryside transcribing tales told by peasants, but took tales directly from literary sources or transcribed stories told to them by people in the middle class, including family friends.

He then discusses some of the quintessential characteristics of the classic fairy tale. These are things that we all sort of know about fairy tales, but I for one like to see the essentials pinpointed; it makes me appreciate those qualities that much more:

I’m not going to review any individual stories; we all understand their appeal and the power of their plots and images, so I prefer to just describe the experience of reading them in an anthology. As I said, it was much more enjoyable than I expected. Rather than just reading them as a kind of research, I curled up with my Kindle and just enjoyed the tales as stories.

Perhaps because of the tales Pullman chose, my attention was also drawn to some common tropes and patterns – the way men decide to marry girls after a single glance, the way female beauty is almost always extraordinary (the princess is the most beautiful woman in the entire kingdom), the boundless loyalty and determination of certain servant and helper characters. In addition, Pullman frequently draws your attention to certain images, shares variations of the tale (each one comes with a list of similar stories), or discusses interpretations.

Because he sticks closely to the Grimm versions, you’ll find some of the lesser-known – and less romantic – details of the most popular tales. Cinderella doesn’t have a fairy godmother but a magical tree growing over her mother’s grave, and her stepsisters cut off parts of their feet to try and fit into her slipper, a strategy that somehow works until talking birds draw the prince’s attention to the dripping blood. Snow White doesn’t wake up when the handsome prince kisses her; instead he convinces the dwarves to give him her comatose body in its glass coffin (god knows what he wants to do with it), and she wakes up when a servant carrying the coffin trips and dislodges the chunk of apple in her throat. Similarly, the princess doesn’t restore the Frog Prince to his humanity by kissing him; she gets angry and throws him against the wall.

All this not only revived my appreciation of classic fairy tales, but made me want to study them again (I did, for a bit, at varsity). To indulge that urge, I’ve got some great non-fiction review copies lined up:

– Once Upon a Time: A Short History of Fairy Tale by Marina Warner (who Pullman references several times) published by Oxford University Press on 1 December 2014.

Can’t wait to get into those 🙂